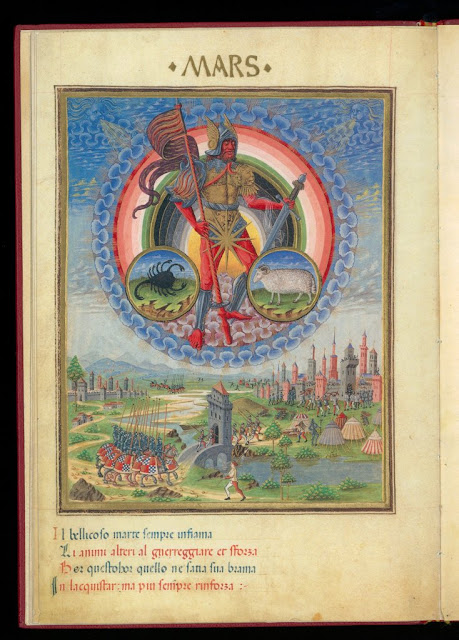 By Cristoforo de Predis (1440-1486)
World Digital Library of the Library of Congress in partnership with the Estense Library of Modena, Italy
The Big Picture in November

This is the season of Scorpio, the zodiacal sign energy that influences this time of year. We are open to encountering events that have a tone of the mysterious. The Scorpio realm involves deep emotions that we often associate with memories of the dead, particularly of relatives and more distant ancestors. Even if we do not tune in to otherworldly subject matter, we can observe that we and others examine the world in an intense way, a characteristic of Scorpio. Moreover, it is the season when we may probe for the truth, and when material is uncovered. This month, Scorpio energy is particularly strong from November 5 until November 21, when we have the Sun, Mercury, and Mars in the sign of the scorpion.

Mars (pictured above) is the traditional ruler of Scorpio. This planet of action and confrontation also figures in some key aspects this month. On November 10, Mars conjuncts Mercury in Scorpio and together they form a square aspect to Saturn in Aquarius. Around this time, we can expect a pronounced level of intensity on the part of individuals and groups vocally advocating for demonstrable actions on issues (Mars) against those representing authority and the established order (Saturn). A week later, on November 17, Mars will oppose Uranus. Energetically, this suggests that we might be involved in or a witness to situations that are out of control, such as rebellions. Furthermore, we could see a lot of unexpected activity or findings that might surprise or even shock us. Finally, this could be a time of break ups, either on a personal relationship level or among organized bodies, such as those in governments or businesses.

Although Scorpio is predominant in November, we also have a new emphasis on Capricorn. Our lovely planet Venus enters the earth sign of Capricorn on November 5. Still orbiting out of bounds all month, we don’t know how Venus will behave. Capricorn is a serious and committed sign, but will Venus buck the formality? Furthermore, Juno, the asteroid associated with power issues within the institution of marriage, enters Capricorn on November 14. Of course, the power planet Pluto is completing its transit of the 24th degree of Capricorn.

At this time of year the lunations occur on the Scorpio-Taurus fixed signs axis. The New Moon at 12° Scorpio 40ʹ occurs at 2:15 pm PDT on November 4. The Sabian Symbol for this degree speaks of an inventor conducting a laboratory experiment. This suggests that on an emotional level, we are ready to delve into something to see what we can find. Then, at 12:58 am PST on November 19, we have a Full Moon Eclipse at 27°14ʹ Taurus. Of course, eclipses are times of revelations. We might uncover some information that leads to significant change in our lives. The Sabian symbol for this degree speaks of the reawakening of something that you feel passionate about.

The day following the lunar eclipse, Jupiter in Aquarius forms a square with Mercury in Scorpio. As a significator of truth, Jupiter might usher in information that could reveal sources of new information that has been kept under wraps. At the larger societal level, could we be presented with major information about the January 6th Capitol insurrection? Will new actions emerge from the legal cases of publisher Julian Assange and environmental attorney Steven Donziger? What will the U.S. Supreme Court decide on the reproductive (Scorpio’s realm) rights of women when they deliberate the Texas law on abortion.

This month marks the 58th anniversary of the assassination of President John F. Kennedy. That represents two Saturn cycles. Despite existing laws (pursuant to Public Law No. 102-526) that mandate the release of federal government records on this event, our country’s chief executives have continued to delay their release. On October 22, 2021 the Biden Administration announced another postponement, citing delays due to the pandemic. More information on this delay will occur this December, and some records might be released in December 2022. Nevertheless, during this season we could see the release of information from nongovernment sources that could enlighten further on this long ago but impactful event.

Posted by ASTROLOGY DIALOGUES at 12:09 PM