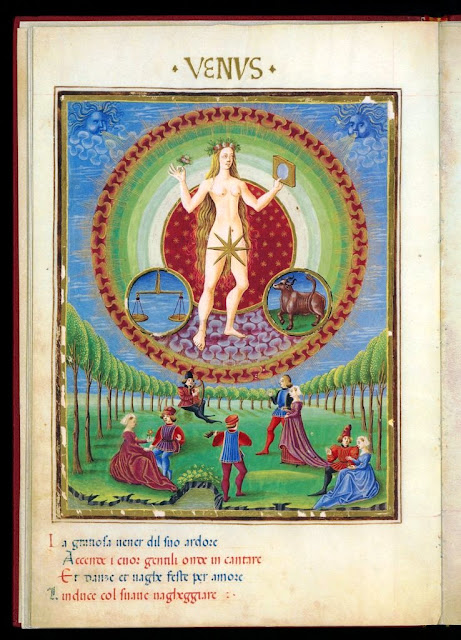 By Cristoforo de Predis (1440-1486)
World Digital Library, Library of Congress in partnership with the Estense Library of Modena, Italy

With three planets moving direct in October, we are preparing to unveil our revised projects for a test drive. Up until this month, new projects might have felt like they were in a holding pattern. The three planets providing this forward impetus in October are Pluto, Saturn, and Jupiter. Pluto, the power planet, begins moving direct on October 6. Four days later, Saturn, the planet that builds structures and formulates systems starts its forward motion. Finally, Jupiter, the planet of long-range planning (as well as philanthropy, publishing, higher education) initiates its direct orbit on October 17.

However, our project launch might still require some rethinking and tweaking. This is because Mercury, the planet of the mind, communication and commerce, is in retrograde motion until October 18 and will still be in its post-retrograde shadow until November 2. Although delays can be annoying, we can also acknowledge that we can build additional expertise when we do fixes to our projects and this allows us to bring forth a higher quality product.

Venus, the planet of relationships and resources, figures prominently in October. First of all, those planets in Libra or Taurus this month will report to her. This includes the Sun, which will be in Libra until late evening of October 22. Also reporting to Venus are Mercury, in Libra all month; Mars, which transits Libra through October 29; and finally, slow-moving Uranus, which remains at 13° Taurus all month.

Another Venus phenomenon this month is her “out of bounds” orbit, which begins on October 9. When a planet exceeds the declination degrees of the Sun, the planet operates in ways that vary from its typical characteristics. With Venus out-of-bounds, we could see ourselves behave uncharacteristically in the areas of relationships, values, and matters involving our financial resources or possessions. Consequently, we can expect our Venus in Sagittarius self to “do its own thing” in October. It’s a time when we let our hearts and our dollars (or bitcoins) fall where they may.

Throughout the month, Venus forms nine major aspects with other planets, indicating a busy calendar of activities. During the first week of October, Venus is in the late degrees of Scorpio, so she can be somewhat intense until she begins her transit of Sagittarius on October 7. She might be inclined to delve into deep psychological territory when she encounters Saturn in a quintile relationship on October 2. Because Venus in Scorpio is in mutual reception with Mars in Libra, the energy flows quite nicely.  Later, on October 16, Venus in Sagittarius forms a quintile with Jupiter that could result in more jovial creativity. On October 19, Venus meets up with unorthodox Uranus in Taurus in a quincunx relationship. To their surprise, they discover that their oddball ways are not on the same wavelength but one or both might consider adjusting their expectations. But when Venus encounters Neptune in Pisces on October 30, she determines that this square relationship is just too stressful, perhaps because Venus wants some tangible results, and well, Neptune is just too vague about goals.

Venus rules the first lunation of the month, the New Moon in Libra (13°25′) on October 26. At this New Moon, we have Mars conjunct the Sun and the Moon. This adds a very active quality to our feeling mode. We are moved by all things Venusian that relate to Libra, such as harmony, justice, diplomacy, relationships, and the fine arts.

As the ruler of the sign of the Ram, active Mars is associated with the Full Moon at 27°26ʹ Aries on October 20. On this day, Mars and the Sun still form a conjunction within four degrees of one another. Full Moons are often associated with a hectic pace, and I would expect no less at this lunation because Mars is particularly strong. Be alert for feelings of confrontation. Hopefully, we can steer clear of road rage incidents and keep our distance from those who carry armaments.

Posted by ASTROLOGY DIALOGUES at 11:16 AM