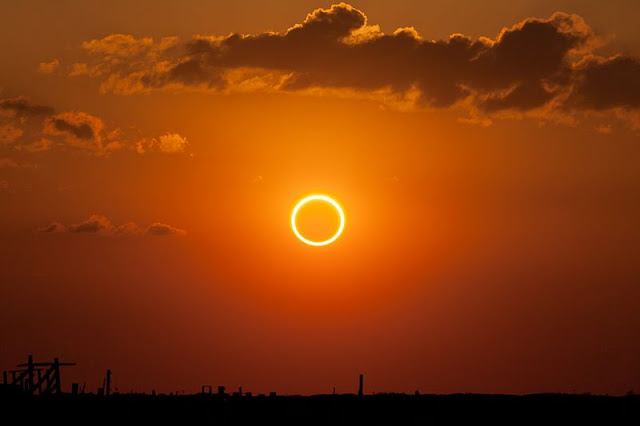 Annular Eclipse with Ring of Fire

Hold on to your hats because June is jam-packed with cosmic activity. A lunar eclipse occurred late last month and because eclipses occur in pairs, we have the second eclipse occurring at the New Moon on June 10 at 19° Gemini 47′. Only four days after this solar eclipse, on June 14, we have the second exact square this year between Saturn and Uranus, two planets with very different motives. Adding more drama to an already high-pitched month is Venus, the planet of relationships and values, which will continue in her out-of-bounds orbit through June 17, suggesting that she might not be operating by the rules. Also, at different times this month, we will have five planets in retrograde motion, indicating that those planets might demonstrate their essence through internal expression.

In the symbolism of astrology, eclipses represent periods of revelation when particular matters “come to light.” The June 10 Solar Eclipse corresponds to new starts and new cycles. This eclipse will especially affect those with planets around 19° Gemini or who have planets around 19° of the other mutable signs of Virgo and Sagittarius. Perhaps to a lesser extent, planets in your chart around 19° of any sign could feel some significant new starts.

At the time of the June 10 solar eclipse, the Sun, Moon, and Mercury will be transiting Donald Trump’s 10th House, the place of highest visibility, and these planets will be in a conjunction with his natal Uranus, North Node, and Sun within 3 degrees. Will Donald Trump be experiencing some surprises or jolts around the time of his birthday? It is likely that regardless of the subject matter, there will be a focus on past or present activities involving Trump.

How is the June 10 solar eclipse affecting our nation’s natal chart? If we view the Sibley chart (Koch Houses), we see that the Sun, Moon, and Mercury are transiting our nation’s seventh house of “the other.” These planets are in a conjunction (within two degrees) with the U.S. natal Mars, the planet associated with war and defense. This is the time of year when the national budget is presented for debate (Mercury) and a vote by Congress. Some elected officials are questioning the level of expenditures in the proposed defense budget (Mars) that continues to increase year after year, regardless of whether other needs are salient (like the pandemic, a crumbling infrastructure, etc.). It appears that it has become less taboo to challenge (Mars) the amount of resources our country allocates for weapons and other expenses related to “defense.” Of course, this symbolism in the transit chart of our nation could have many meanings, and this interpretation is but one possibility.

The square between Saturn in Aquarius and Uranus in Taurus is in effect all year, but these two planets reach an exact aspect three times this year. We already have experienced the first exact square in February, and on June 14, the second exact aspect will occur. As you know, the square aspect reflects a situation of tension and strain. Whatever is causing this tension can be relieved through some form of action. On a personal level, we can become aware of what it is we might feel conflicted about. Perhaps we don’t yet see an acceptable resolution to a matter, such as not wanting to compromise on something that is of great value to us. If we take some sort of action, such as voicing our concerns, it might help to ease our feelings of uncertainty or ability to cope. At the societal level, we might observe similar dynamics. For example, governments (Saturn) might decide to keep environmental standards at existing levels, but environmental activists (Uranus) insist that this change is too slow and threatens the ability of humans to sustain habitable environments. This Saturn-Uranus square symbolism can apply to various issues occurring within society that are associated with its themes.

For the better part of the month, Venus, the planet of relationships, resources, and values, is out-of-bounds, a period when she might operate unexpectedly. Perhaps on a personal level, we might act out of character with others or we might not adhere to our usual values or spending habits. However, by June 18, our typical pattern most likely will return.

Finally, in June, we see four events of sign changes. Venus enters watery Cancer on June 2, signaling that the planet of relating and values will be influenced by the sign changes of the Moon, the ruler of Cancer. One can anticipate some moodiness in relating to others. However, by June 26, this planet of love moves into dramatic and romantic Leo. For the first 10 days of the month, the action planet Mars has been in sensitive Cancer, but he makes the switch into fiery Leo. Consequently, with both Venus and Mars in Leo, we might see people in hot pursuit of their passions. Last, but not least, we have the SUMMER SOLSTICE occurring in the evening of June 20. The Sun will now transit the nurturing sign of Cancer, which might provide some tenderness to the torrid pursuits of Venus and Mars.

Posted by ASTROLOGY DIALOGUES at 5:13 PM