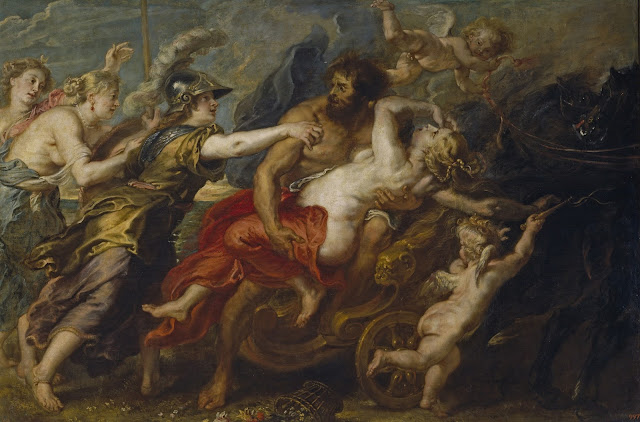 The Rape of Proserpine

When I analyze the astrological events each month, I take note of which planetary aspects, sign changes, and other phenomenon I  see as potentially having the strongest influence in the coming month. In October 2020, I’ll be watching the following cosmic activity:

·        Pluto’s return to direct motion. Pluto is also significant this month as the ruler of Scorpio.  Additionally, Pluto is considered the higher octave of Mars, a planet with which it has an exact aspect this month.

·        Venus representing issues of the feminine and her rulership over the signs Libra and Taurus. I also include the Moon as a significator of the feminine.

My sense is that October 2020 will be a month that stands out, probably for many reasons. One set of phenomena that makes October unusual is that it there will be TWO full moons. The first of these on October 1 is the “hot” full moon in Aries that begins the month. This first full moon conjuncts Chiron, the “Wounded Healer” that reminds us of our vulnerabilities and the need to heal ourselves and others. This cosmic body also symbolizes teaching and mentoring. Additionally at the end of the month, we have a second full moon. When a month has two full moons, the second one is called the Blue Moon, and ours this month falls on Halloween! This last full moon will conjunct Uranus, the planet that alerts us to “expect the unexpected.”

Power and conflicts are highlighted this month by their astrological symbols, Pluto and Mars.  Pluto in Capricorn returns to direct motion on October 5. As retrograde Mars in Aries proceeds with his backward motion, he once again forms an exact square with Pluto on October 9. We can prepare for this explosive potential in our personal lives, and watch for this volatility in our social environment.

One doesn’t need to know astrology to anticipate power struggles in October. Following the death of Supreme Court Justice Ruth Bader Ginsburg in September, we saw the power grab for her seat as the Chief Executive and his political party moved to nominate and schedule confirmation hearings for a woman opposed to a woman’s right to choose. From my vantage point, I see the potential for American women losing ground in legal rights for self-determination.

Media has reported that Amy Coney Barrett, the judicial nominee, belongs to a religious group that encourages married members to ascribe by a lifestyle where the husbands are spiritual advisers to their wives, and hence, the ultimate decision-makers. This example of an imbalance of male-female power reminded me of the stories in classic mythology where a woman is abducted against her will. In the Reubens painting at the beginning of this article, Pluto (Hades) is seen capturing Proserpine, or also known as Persephone, whom he will take to the underworld. The Persephone myth is explained in the world of psychology and astrology as a symbolic process of spiritual rebirth culminating with positive growth. However, I viewing this symbolism of Pluto/Hades in a more literal way. The act of abduction reflects social norms where women are not considered worthy of equal rights and treatment. Pluto/Hades does not present Persephone with a choice. Hence, if Roe v Wade is overturned, women will lose their ability to make choices.

Pluto rules the sign Scorpio, which is prominent this month in the guise of Mercury and the Sun. Mercury, which is associated with the dissemination of information, will be transiting Scorpio until the 27th, when it moves back into Libra. We know that a Scorpio talent is research and investigation. Scorpio probes deeply to expose what has been hidden, oftentimes unsavory and taboo material. The public has recently been made aware of Donald Trump’s tax returns, which revealed his financial woes. I counted ten Mercury aspects in October, so I would expect that we will have the opportunity to learn about many new pieces of information, either in our personal lives or in the social realm.

At the beginning of the month, we find Mercury in its pre-retrograde shadow, where it remains until October 13, when it begins moving backward. Mercury will turn direct on November 3, which is Election Day, but it will then be in its post-retrograde shadow. We know that during Mercury retrograde periods we are prone to misunderstandings, equipment malfunctions, and mistakes. Needless to say, with an important election season upon us, it is worrisome that we could have mishaps combined with intentional misdeeds. Whether in our personal lives or in our social environment, we need to make ourselves hyperaware of communication activities. Check it once, check it twice, and check it three times!

In presidential election years in the U.S., we often hear about the possibility of an “October Surprise,” which is political jargon for a planned or spontaneous news event whose ultimate effect is to influence the outcome of the election.  In astrology, surprises are often associated with Uranus, the planet known as the upper octave of Mercury.  Currently transiting steady and practical Taurus, Uranus will be making contacts with the Sun, Mercury and Venus. If there is a surprise this month, could it involve a woman or a matter concerning women’s issues?

The language of astrology appears to confirm that women and their issues are featured during the month of October. The New Moon is in Libra and the second Full Moon is in Taurus. These two signs are both ruled by Venus. For most of October, Venus is in Virgo, a feminine manifestation of Mercury. The Women’s March organizers are planning an event on October 17, and this might range from in-person gatherings to online virtual presentations. With a natal Libra Sun sign, Kamala Harris will be featured nationwide when she debates Mike Pence on October 7. Lastly, the anti-feminist Amy Coney Barrett will face the Senate Judiciary  Committee the week of October 12.

Posted by ASTROLOGY DIALOGUES at 11:20 AM