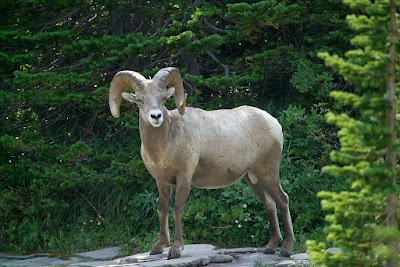 (By GlacierNPS - Bighorn ram Uploaded by AlbertHerring, CC BY 2.0,
https://commons.wikimedia.org/w/index.php?curid=29616832)

In April 2018, we might have the sense that we are revisiting what has been conceptualized and discussed in the past, as Mercury, the planet of communication and the mind continues its retrograde motion during the first two weeks of the month. Because this planet is in the sign of Aries, we could experience the fiery desire to move quickly on matters. However, fast action during retrograde periods could result in a hastiness that causes us to skimp on important details. Consequently, we might need to redo some of our projects.

Our need for reexamination during April extends beyond our ideas and words. Jupiter, the planet ruling long-term visions and plans is on a lengthy trip backwards (ending in July). Moreover, Saturn, the planet that adds definition and builds solid structures, joins the retrograde action beginning on April 17. The retrograde motion of these two social planets suggests that we could be nudged to reassess our long-term plans, and we might identify the need to retool to create what we want. Given that Jupiter is in investigative Scorpio, the review of our vision should be thorough, and possibly brutally honest. This exploratory inward journey could be especially intense as Pluto, the planet of transformation and the ruler of Scorpio, will begin a long retrograde period beginning on April 22.

Saturn in diligent Capricorn, the sign it rules, provides an earnest ambiance to the task of shaping our plans into tangible products. This focused energy is given life by Mars, the doer planet that is presently transiting Capricorn, the sign that answers to Saturn. Hence, there is a great momentum toward the concrete.

Adding to April’s shifting quality is the impending transition of Uranus, the sudden change planet, which is transiting the last degrees of Aries, a sign that thrives on spontaneous action. In mid-May, this quirky planet will begin its transit of Taurus, the earthy and deliberate sign that expresses itself in a manner that is quite alien to Uranus. Nevertheless, the grounded quality of Taurus should slow down the process of change, and contribute to our efforts to bring endurance to our projects.

Taurus plays a big role this month, as Venus is now transiting this sign during the first three weeks. As Venus exits this sign it rules, the Sun will then begin its monthly stay in Taurus at the end of the third week. Meanwhile, Venus in Gemini is prompted to leave her comfortable and aesthetically adorned abode to mingle with others at networking events or schmoozing with siblings and friends.

A major generational shift occurs on April 17 when Chiron, the comet associated with mentorship and healing, ingresses into Aries, a sign it will transit for the next eight years. The last time Chiron ingressed into Aries was in 1968, a year of great social upheaval. This might be a period when we experience much rebellion at the societal level. The torch is being passed from one generation of change agents to another. Many consider it a time to begin addressing sane strategies for curbing gun violence and for finding workable solutions to international conflicts. We might also see healing modalities emerge that incorporate the element of fire or that harness energy in a new way.

We begin the month with Mercury within one degree of the Sun, thus creating a climate where we experience the desire for expression. Because Mercury is in fiery Aries, we might be spontaneous in our judgments and words, so keep this in mind if you find yourself in an atypical social setting. As Mars and Saturn meet up at 8° Capricorn on this day, we might be tempted to expend a great deal of energy working toward our goals, whether that be putting together an elaborate Easter spread or activities devoted to our work or hobbies. This ambitious energy might not operate at a high threshold because cautious Saturn can act like a brick wall to slow down our pace. However, as these two planets  separate, Mars is free to resume its momentum.

We need to remember to observe the details of projects or products at this time, because Mercury in Aries is retrograde, and our mind (and communication equipment) might be operating in a manner outside our usual norm. This might be especially true in the earlier part of the week when Mercury feels at odds with purposeful Mars as they form a square, indicating we might be faced with situations of pressure and stress.

This is the last week of the Mercury retrograde period, although the planet will still be in its shadow period (retracing its movement over the retrograde degrees) until May 4. Pay close attention to power moves that you see building in competitive situations, as the Sun squares powerful Pluto. However, Jupiter sextiling Pluto instills confidence in our position and the ability to sustain challenges. Meanwhile, creative endeavors or romantic relationships appear favorable as Mars and Venus form a harmonious trine on April 10. Friday the 13th is opportune for acting on our imagination as Mars sextiles dreamy Neptune.

We can sense significant change this week. Mercury begins moving direct on April 15 and two days later, on April 17, Saturn stations and begins its retrograde motion at 9° Capricorn. On this day, we also see the Sun and the surprise planet, Uranus, in a close conjunction. We could be ripe for an identity shift or we might feel excitement about some new personal goals. With the pleasure planets Venus and Jupiter in opposition, we could become aware of our habits of overindulgence or of overvaluing an aspect or possession in our life.

The New Moon at 26° Aries 2′ occurs on Sunday, April 15 at 6:57 pm PDT. Some interesting phenomenon occur simultaneously. On this day, Mercury is stationing to move direct. Consequently, we can be prepared for movement forward in areas related to communication, whether that is in our thinking, our written or oral communication, or with respect to the tools we utilize for distributing our communications. Since the moon represents our emotional nature, we are psychologically ready to make some changes and to start anew in some aspects of our life. Yet, the sign of Aries is ruled by Mars in Capricorn, the sign ruled by Saturn. On April 17, Saturn will station and begins its retrograde cycle. Because Saturn deals with time and manifesting tangible results, we could say that during this period we might revise timelines for certain projects, perhaps because we realize that their accomplishment will take longer than planned.

The Full Moon at 9° Scorpio 38′ occurs on April 29 at 5:56 pm PDT. This is an appropriate time to bring something to fruition. Scorpio energy encourages us to uncover and expose necessary material in order to promote greater growth. Consequently, we might experience intense emotions now, and it might benefit us to air issues that need to be addressed for our wellbeing. Around this time, at the societal level, we might learn of some lawlessness committed on a large scale or we might hear of criminal allegations against prominent individuals.

The month goes out on a powerful note as active Mars conjuncts Pluto, the planet that purges that which has decayed within our personal lives or institutions at the societal level. When people or countries are at odds, this could be a volatile time. With this intense climate, people might challenge authority when Mercury squares Saturn. Communications might be halted for a time, or the exchange of information might be difficult. Despite these apparent barriers, our commitment to our ideas and obligations might see rewards towards the end of this week as the Sun trines Saturn. We could feel a great sense of accomplishment.
Posted by ASTROLOGY DIALOGUES at 8:09 PM