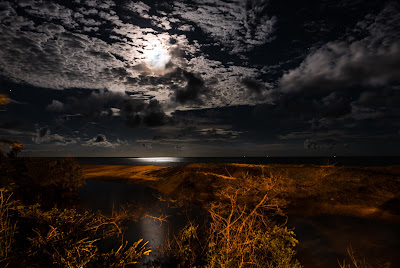 Full moon over the sea in Coruripe, Alagoas - Brazil
by
By Alfredo J G A Borba (Own work)
[CC BY-SA 4.0 (https://creativecommons.org/licenses/by-sa/4.0)], via Wikimedia Commons

The month of March represents the border between Winter and Spring. In the last days of winter, we are still in the Piscean realm of spirituality, dreams, and imagination. Hence, the feeling mode is still dominant at the beginning of the month with the Sun, Mercury, Venus still in Pisces, as well as this sign’s ruling planet Neptune, which is here for the long haul until 2026. However, later in the month, the sign of Aries will begin to dominate the landscape as the Sun enters this sign on March 20, joining Mercury, Venus, and Uranus, although the later planet will change signs in May.
We begin the month with an eventful Full Moon at 11 degrees Virgo. In the lunar cycle, full moons represent a culmination of energy, so it is a good time to bring something to fruition and to receive recognition. The practical earth sign of Virgo asks us to focus on what is important to us at this time, and this often requires some discernment on our part. This Moon signals that something is ripe for harvesting.

Jupiter themes are important this month. At the beginning of March, Venus and Mercury form a trine with Jupiter, an easy flowing energy that favors bounty in our resources and relationships. It’s a time that we might be thinking big in our ideas and we could be quite optimistic about the way we communicate at this time. However, our expansive nature, as expressed by Jupiter, turns inward as this planet stations on March 8 and begins a retrograde period that will last until mid-July. This is an opportune time to make the most of curbing excesses, in whatever aspect of our lives we believe that is most applicable. By mid-month, we will also need to deal with responsibilities and assume a more realistic perspective when Saturn forms hard aspects to Mercury, Venus, and Jupiter.

In the middle of the month, on March 17 at approximately 6:11 am on the West Coast, we have a New Moon at 26 degrees of Pisces. This is almost like the last hurrah for Pisces energy, as we have the luminaries (the Sun and the Moon) and the asteroids Chiron, Juno, Hygiea, and Astraea still in this sign, and Neptune is still journeying here. However, by March 21 the Sun will enter fiery Aries and only Neptune and four asteroids will be in Pisces. There is a feeling of initiation as we enter the Spring Equinox and begin a new lunar phase, making this an excellent time to set intentions for this season.

The month culminates with the Full Moon (a Blue Moon) in Libra at about 5:36 am. The day before, Venus will have moved into Taurus. Because Venus rules both Libra and Taurus, we end the month in a very aesthetic fashion.

The First Week (March 1-3)
This first weekend of March is a great time to socialize with people you like and with whom you can express your feelings and aspirations. There is an easy flow of energy that supports honest but diplomatic communication. However, we might encounter someone who is not part of our regular crowd, and they might bring up some surprising (or even shocking) information that adds some electricity to this otherwise sweet weekend as Uranus semisquares Mercury and Venus. We benefit from actively dealing with feelings about old wounds related to past communications and relationships as Chiron conjuncts Mercury and Venus.

The Second Week (March 4-10)
A focus on spirituality could aid us in dealing with emotional subjects that we recently encountered as the Sun shines its light on Neptune. We might especially enjoy venturing into the realms of imagination and dreaming at this time, and possibly express it through some art form. However, when Mercury and Venus enter active Aries on March 6, we might need to take on new forms of relating and networking. At the same time, expansive Jupiter in Scorpio urges us to examine areas of our life where going overboard is not to our benefit at this time. It might be to our advantage that revelations come to light, whether on a personal level or societal level.

The Third Week (March 11-17)
The action planet Mars spurs us on to do some healing (Mars square Chiron), whether individually or collectively. We might do so in an inventive or revolutionary fashion when Mars trines Uranus, bringing harmonious energies into this arena. While the Sun shines its light on benefic Jupiter, because the big planet is inward, it heeds the message of the Venus-Saturn square to restrain financial and culinary excesses. This might be difficult to do as we approach St. Paddy’s Day at the end of the week. The New Moon in Pisces falls on the Irish holiday at 6:11 am on the West Coast. That day also marks the shift of Mars from Sagittarius into goal-oriented Capricorn. We can now look forward to seeing our actions getting serious results!

The Fourth Week (March 18-24)
The Sun joining Chiron will not let us forget that individual or mass healing is needed. This is quite appropriate at this time because March 24 is a national day of action around the issue of gun control. On March 20, the Sun enters Aries, marking the beginning of Spring. This is the time to set intentions for the season. These intentions might include transforming your attitudes and practices in the realm of sensual pleasures and relationships as Venus squares Pluto, the planet of purging that which is no longer needed. This week also brings us Mercury retrograde, beginning on March 22. We might shift our perspectives on matters. It’s a good time to check our communications and equipment, because sometimes they may go awry. Watch out for volatile situations when the Sun squares Mars. I pray for the safety of participants in the activities of March 24.

The Fifth Week (March 25-31)
We get offsetting energies as Venus the planet of attraction conjoins wild guy Uranus while a day later the Sun squares restrictive Saturn. Our experimentation might be short-lived! Venus feels more like her true self on March 30 as she enters Taurus, a sign she rules. The emphasis will be on feeling connected with the earth and our bodies. The following day, March 31, we have a Blue Moon. This is a Full Moon in Libra, which occurs at 5:36 am. Hence, we end the month in Venusian fashion. With the Sun in individualistic Aries, and the Moon in “other-oriented” Libra, we might seek a balance between the needs of others and our personal needs.

MAY YOU ALL ENJOY THE END OF ONE SEASON AND THE BEGINNING OF ANOTHER!
Posted by ASTROLOGY DIALOGUES at 3:50 PM