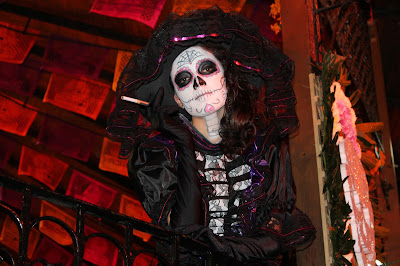 November is typically a month influenced by profound energies as the Sun transits Scorpio. This energy approaches the events of life with great intensity because one of the this sign is about our confrontation with endings, particularly the inevitability of death. People attuned to the Scorpio season perceive a fine line between the world of sentient beings and the spirit world of the departed. In the tradition of many cultures around the world, this is the time for commemorating those who have left the earthly realm. There is a line by the dying mother in Isabel Allende's book Eva Luna, where she says, “There is no death, daughter. People die only when we forget them,' my mother explained shortly before she left me. 'If you can remember me, I will be with you always.”

Dia de Los Muertos in Mexico (as well as in other Latin American countries) has its roots in the practices of the native peoples. I am not an expert in indigenous culture nor in the original observance of this day. My understanding is that at this time of year, the indigenous peoples designated days when they would reconnect  with their departed ancestors and invite them for a return visit. In order to entice the ancestors to come back, the living descendants prepared their favorite foods and built lovely alters displaying their treasured items.With the arrival of the Spanish and other cultures, Dia de Los Muertos has evolved to reflect history. For example, in modern times we see the figurine of "La Catrina" (such as the one in the photo above) present at the Dia de Los Muertos celebrations. She is a creation of Mexican society of the early 20th century, when a revolutionary fervor was brewing. La Catrina represents a wealthy Mexican woman, beautifully adorned, who has fallen victim to death. Death is seen as the great equalizer.

Scorpio energy keeps us attuned to the “deaths” we often undergo in our identity as we transform from one life passage to another. Then we must confront the reality of our own mortality. Some astrologers have posited that individuals with significant Scorpio energy in their natal charts experience life and death issues more often than those whose charts have less concentrations of that energy. This seems logical if we view our birth chart as our “operational instructions” for this lifetime. . When you have been on the fringe of death, you might have an especially strong appreciation for living life to its fullest.

This year, these deep energies are even more pronounced because Jupiter has recently entered Scorpio. One of the motivations of Jupiter is to develop a vision or a philosophy. Jupiter’s orientation is to venture wide and look broadly at issues, but with the influence of Scorpio, this planet’s motivation will incorporate the urge to go deep, where there is the potential to uncover and reveal the truth. This energy applies to matters in our personal lives as well as in society.

Because Jupiter will be in Scorpio until next November, we will see issues exposed that deal with the territory of Scorpio, which the ancients defined as sex, death, taxes, and the resources of others. These topics relate to power issues, the realm of Pluto, the modern ruler of Scorpio. Consider the issues our society is talking about right now. Many incidences of sexual harassment by powerful men are being revealed by women. More of the Kennedy assassination documents have been released. The Mueller probe is uncovering money laundering activities and tax evasion by important political players. We might hear more about how “other people’s resources” from another nation influenced our electoral process in the United States. Of course, such activities are present at other times, but in this time of concentrated Scorpio energy, the victims and participating players in wrongdoing may feel empowered to expose this material. This truth-telling appears amplified and magnified now. On a more personal level, this is a time that you may see things revealed in your life.

The Week by Week Cosmos Climate

We begin the month with a carryover from last month, in which we perceive benefits to deepening our talents (Jupiter quintile Pluto), perhaps through further study. It might be an opportune time to showcase our abilities to aid others in getting to the truth of a matter or to confront the plutocracy. If you want your writing to have a powerful impact, this would be the time to publish it.


Since September, we have confronted issues concerning an old wound and we might feel like we can’t move forward without doing some serious work on this matter (Saturn square Chiron).The concentrated energy of Scorpio might be the impetus to seriously undertake this work on our psyche. The ease of talking about deep matters (Mercury still in Scorpio trine Chiron) assists us in working with the wound. It facilitates an inner dialogue and prompts us to seek the advice of others. Those who have successfully worked on similar issues can be of value as mentors and healers to others. The energies of innovation and awakening (Uranus) and structure-building and commitment (Saturn) are still in harmony (trine aspect), so some innovative thinking around emotional blocks may bring breakthroughs.

Relationships might seem thrown off-balance by some unexpected or even shocking matters (Venus opposing Uranus) but if serious efforts are made (Venus sextile Saturn) you could bring stability to this area of your life. Before Venus moves into Scorpio, enjoy a more the harmony-oriented perspective of Venus in Libra.

November 3 is a potent day with the Sun and Neptune reaching an exact trine and the Full Moon occurring in Taurus. It would be fitting to devote our attention to artistic pursuits on this day, or to take in a good movie, particularly one involving a great deal of imagination (and special effects?). Earthy Taurus likes the practical and this is an opportune time to work on something tangible. This could involve anything you consider your assets, valued possessions, and even your garden. The energy of this day is a nice respite from the deep psychic work we might be doing on another level.

Mercury moves into Sagittarius on November 5 bringing the energy of brutal honesty (written and oral) into our realm. This is a good time to churn out white papers and work on vision statements. Our mental faculties and communication patterns will be under the domain of Sagittarius for over two months, because Mercury will be turning retrograde at the beginning of December and will then retrace its territory in this sign before moving on.

Venus leaves airy Libra and enters powerful Scorpio on November 7. This will make the Scorpio energy more intense at this time. Our relationships, particularly in the romantic realm could be overtaken by deep passions, including obsessive tendencies.

The amorphous and idealistic planet Neptune is of particular importance at this time. Rational Mercury is in tense aspect (square) to Neptune, exactly on November 13. Do I work on my term paper or do I indulge in creating a music video? The music video might win out, particularly on November 16 because Venus will trine Neptune, two planets that are concerned with aesthetics, thus providing a magical aura for artistic creations.

November 18 will bring the ultimate in intense energy, when we have a New Moon in Scorpio, emphasizing the concentration of planets in Scorpio. As this occurs in the early morning hours, this time might best be spent in a safe place with your beloved. However, the intensity should ease off about eight hours later when the Moon moves into Sagittarius.

Mars in Libra, the planet of action has conflicts with Pluto in Capricorn on November 19 when it forms a square aspect. Pluto rules Scorpio, so this irritation emphasizes the energy of intensity we are experiencing this month. Libra is the sign that tries to work things out by finding a point of harmony. This aspect indicates it is having a hard time doing so at this time. However, Libra quiets down the aggressive quality of Mars.

We might feel more buoyant as the Sun begins its transit of Sagittarius on November 21. The Sun has left the underworld of Scorpio and is now looking upward, with its symbol, the archer, pointing its bow and arrow upwards, reflecting his lofty goals.


On November 22, Neptune goes direct once again in Pisces. Neptunian themes, such as idealism, imagination and transcendence may emerge from the internal to external expression.

Mercury conjuncts Saturn exactly on November 27, which might help us focus in tasks that involve writing or preparing and delivering a speech. This aspect might tame a loose Sagittarian tongue.

We end the month with the Moon conjunct Uranus, so be alert to unexpected emotional reactions or antisocial habits (unless you are aching for solitude).

Have a safe trip to the underworld in November!

Posted by ASTROLOGY DIALOGUES at 4:47 PM