THE CHALLENGING BEGINNINGS OF SUMMER 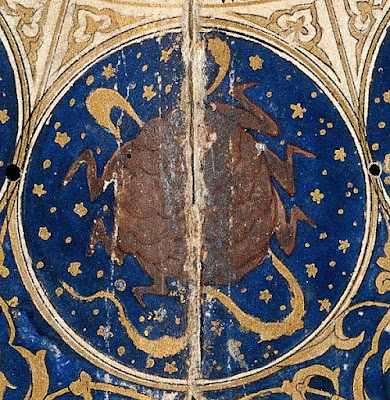 Cancer - Horoscope from 'The book of birth of Iskandar" c.1411
Photo courtesy of  Wellcome Library, London and shared with Wikimedia Commons

On June 20, 2016, the summer solstice occurred on the same day as this month’s full moon, called the “Strawberry Moon” by Native Americans who observed this as the beginning of this fruit’s harvest. So, we have the energy of culmination and the energy of new beginnings.

At the summer solstice, the Sun begins its transit of the sign of Cancer, which is ruled by the Moon. Symbolized by the Crab, Cancer wants to go inward to experience the subjective realm of feelings, unlike the preceding sign of Gemini, who roamed the external world to make myriad connections. Cancer rules the fourth house, which represents the home, one’s roots, including our ancestral past. As a cardinal sign, Cancer has a need to propel forward in initiatory mode to form bonds where it can nurture or be nurtured. Through our family, we learn how to care for others and we develop our sense of security. Because some family environments lack the qualities necessary to instill that level of personal development, many individuals are challenged to cultivate these Cancerian assets in other realms.

During the Sun’s transit of Cancer, we are still under the influence of energies that create challenges in putting our vision and ideals (Neptune) into a long-range plan (Jupiter) that manifests in a durable, working structure (Saturn). In astrological language, this is a T-square between these three planets. Because there is an inherent conflict in this aspect, it serves to propel people into action as a way of seeking relief. I see this energy dynamic visible in what is occurring with the Bernie Sanders campaign. Senator Sanders has always referred to his presidential campaign as a “political revolution,” with a vision of continuing this grassroots movement into the future. This challenge has propelled his supporters into immediate action following the last Democratic presidential primaries, which appeared not to give him sufficient delegates to claim victory. Regardless of this reality, his supporters held a People’s Summit, where people voiced their ongoing commitment to the major issues that formed the essence of the Sanders campaign.

We may be tempted to anticipate warm and fuzzy maternal energy under this Cancer transit. However, the energy we can expect is more like the angry mother or the fierce feminine. Mars, the planet symbolizing war is retrograding back to 23° Scorpio, which it co-rules along with potent Pluto. The asteroid Eris, representing the militant feminine and generally, strife and discord, is presently at 23° Aires and conjunct shockingly disruptive Uranus at 24° Aires. The quincunx aspect between Mars and the conjunction of Uranus and Eris indicates that an adjustment is needed to resolve issues that have necessitated a rebellious feminine response. I’m sure you can think of many recent incidents that have been reflective of this energy. What comes to mind for me is the case of the white male Stanford student who sexually assaulted an unconscious woman and then received less than a minimum sentence for his actions. At its most effective level, this energy is expressed and then followed by concrete actions that strive to remedy the grievance.

In this next month of the Cancer Sun, you might feel an urge to undertake projects around the home or you may be cooking up a storm. This might also be a time when you delve more deeply into your family history. Whatever your homage to Cancer energy, enjoy what you do!
Posted by ASTROLOGY DIALOGUES at 1:47 PM