“FEEL INQUISITIVE” WITH THE SUN TRANSIT AND NEW MOON IN GEMINI 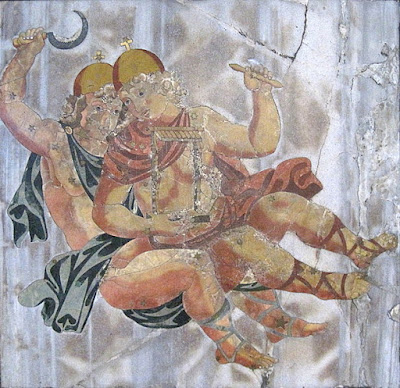 By Jean-Pol GRANDMONT (Own work) [CC BY-SA 3.0 (http://creativecommons.org/licenses/by-sa/3.0) or GFDL (http://www.gnu.org/copyleft/fdl.html)], via Wikimedia Commons
Zodiacal sign of the Gemini on panel of white marble inlaid with colored marble (opus sectile) adorning one side of the Meridian solar line of Basilica Santa Maria degli Angeli e dei Martiri in Rome built by Francesco Bianchini (1702).
On May 20, the Sun began its annual transit of Gemini, the mutable air sign whose month completes the spring season. On June 4, the Moon conjoins the Sun in Gemini to mark the New Moon phase. Representing the feeling mode, the Moon takes on the symbolism of Gemini in its next cycle.

The third sign of the zodiac, Gemini concerns itself with the functioning of the mind, which expresses itself through written and oral communication. The energy of this sign is motivated by curiosity and it seeks answers through objective data gathering or interpersonal communication. Gemini is concerned with disseminating the products of its intellect, through various forms of media, in sales presentations, and in teaching roles.

Mainstream thought says that Geminis change their minds often because their nature is to see duality in the world around them. Hence, they may come around to seeing the merits of an opposing viewpoint.

Mercury, the planetary ruler of Gemini, is considered the “lower octave” of Uranus, the outer planet known for radical change and inventive mass technology. In modern times, we live in a world that rewards those who can understand and operate the latest technology with ease. With each advance in technology, we are pressed to function well in environments that require faster and faster modes. Those blessed with well-placed planets in Gemini or advantageous Uranus aspects should fare well in this cyber age!

Now, getting back to the themes of the Moon in Gemini. As the symbol for our feeling mode, the Moon is about what we NEED. Gemini represents our youth, and as children, we were eager to learn about the world and we were driven by inquisitiveness. (Remember all those whys we used to ask our parents or other adults)? Hence, the New Moon signals for us to satisfy our emotional needs through being open and being curious. I would say this is particularly true after June 12, when Mercury moves from earthy Taurus into the airy sign of Gemini.
Posted by ASTROLOGY DIALOGUES at 11:58 AM