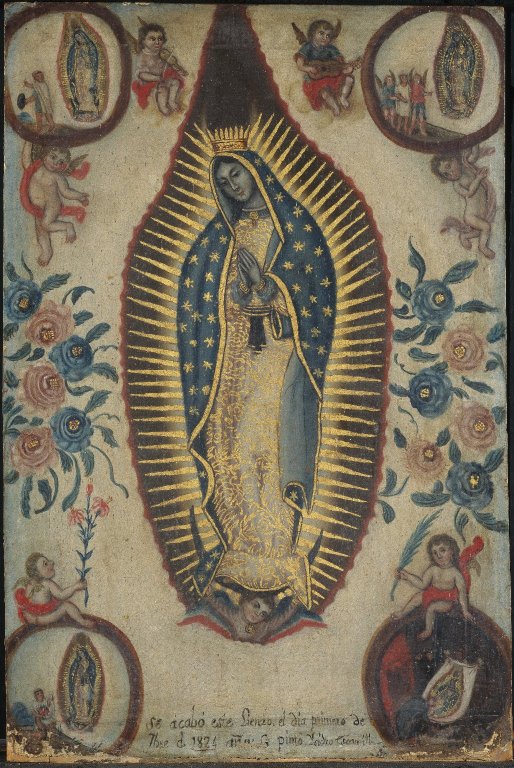 Oil on canvas by the Mexican painter Isidro Escamilla. Virgin of Guadalupe, September 1, 1824.
On display at the Brooklyn Museum, Henry L. Batterman Fund,
Image in the Public Domain uploaded by the Brooklyn Museum onto Wikipedia.

Lately, we have experienced an emphasis on the Virgo archetype with the latest New Moon (and partial solar eclipse) as well as the entry of Jupiter into Virgo. Before the Sun completes its transit of Virgo this year, I wanted to convey my personal impressions concerning how a Virgo (the virgin) theme relates to Mexico.

Mexican Independence Day on September 16 is the country’s major national holiday. Being of Mexican ancestry, and living since birth in a region that was previously Mexico, I am particularly aware of the importance of this celebration.

I will briefly summarize the history of the ritual Mexicans practice each year in recognition of their independence from Spain, which ruled Mexico for 300 years. In the early morning hours of September 16, 1810, the Catholic priest Miguel Hidalgo y Costilla from the parish of Dolores, Guanajuato called upon the people to revolt against Spanish rule. The exact transcript of what he uttered was not recorded, but there are various interpretations of what he said. The Encyclopedia Britannica online provides a short version of the gist of his speech: “Long live Our Lady of Guadalupe [symbol of the Indians’ faith], death to bad government, death to the gachupines [the Spaniards]!” His speech is now referred to as “El Grito de Dolores,” which marked the beginning of the war for independence. Each year, the celebration of Dia de La Independencia (Independence Day) begins with the President of Mexico appearing on the balcony of the National Palace late on the night of September 15, and performing “El Grito.” In his address, he acknowledges all the key participants who were involved in the initiation of independence, and the crowd in the plaza all follow the reading of the names with shouts of “Viva!” (This is similar to the expression of “Long live……).”

It is my belief that the key symbols and icons that are prominent within a country often represent its nature and its soul. Anyone who has been to Mexico, or even to a Mexican-American neighborhood in the United States, knows how the image of La Virgen de Guadalupe is so omnipresent in Mexican culture. She is even mentioned in the country’s cry for independence. (i.e. “El Grito”). Who is this virgin? As the story goes, in December 1531 her image was captured on the tilma (piece of clothing) worn by the young Aztec man named Juan Diego who saw an apparition of the Virgin Mary. She asked that a shrine be built on Tepeyac hill. Juan Diego communicated this holy request to the local bishop, who was dubious. The bishop asked for proof of the apparition, and it is said that the Virgin left her impression on the tilma of Juan Diego, who took this to the bishop. This tilma is displayed to this day in the basilica. La Virgen de Guadalupe became the patron saint of Mexico, and more recently, Juan Diego was canonized into sainthood.

Because the concept of independence and the Virgen de Guadalupe are so intertwined, I posit that Mexico’s birthday is truly September 16, and therefore its astrological natal chart should be based on that date. Astrodienst proposes a January 31, 1917 natal chart, because that is the date the constitution was adopted at the end of the Mexican revolution. This would mean that Mexico’s Sun Sign is Aquarius, which I think reflects a detachment that I don’t perceive in the national character of Mexico, although its people do have a fondness for the concept of revolution (and therefore an attraction to Uranus, the revolutionary planetary ruler of Aquarius). Another possibility is to use the date of the beginning of the Mexican Revolution, which is November 20, 1910. I confess that I have not consulted with any astrological resources within Mexico to learn their view of the most logical birthday for their country.

After a very cursory comparison of these three charts, I still believe that the September 16, 1810 best fits what I know of the Mexican people. In this chart, the Virgo-Pisces and the Taurus-Scorpio axes are very strong. Within the iconography of the Virgen de Guadalupe is the concept of casting off and merging, very reflective of the adaptive qualities of mutable signs. The Virgen de Guadalupe image looks like an indigenous woman. Yet, she became representative of a religion (Catholicism) that was dominant in Europe. In the early 1800’s, the leaders of the independence movement invoked her image to assist them in cleansing the land from its colonial rulership, but at the same time, they retained the religion the Spanish brought to the New World.

Within the indigenous roots of Mexicans we can find extensive rituals of curanderismo (healing) incorporating a myriad of herbs and earthly substances (copal, for e.g.) that are used for cleansing purposes. From my perspective, those practices echo very strongly Virgoan, Taurean, and Scorpionic themes. The Day of the Dead (Dia de Los Muertos) is a very prominent celebration in Mexico. The modern natal chart of Spain (using the inauguration of King Juan Carlos on November 22, 1975) gives that country a Scorpio Sun Sign. In that Iberian nation, we find the practice of (Taurean) bull fighting, a sport that Mexicans readily adapted. I don’t know what astrologers in Spain view as the most appropriate natal chart for their country, but it may be that these two countries are particularly linked by Taurean and Scorpionic energies.

My observations are cursory ones, but perhaps at a later time, I may write more extensively on the astrological nature of Mexico. In the meantime, les doy felicitaciones a mis primos Mexicanos en este dia de independencia!