Part I: The U.S. Pluto Return is an Invitation to the Naked Lunch 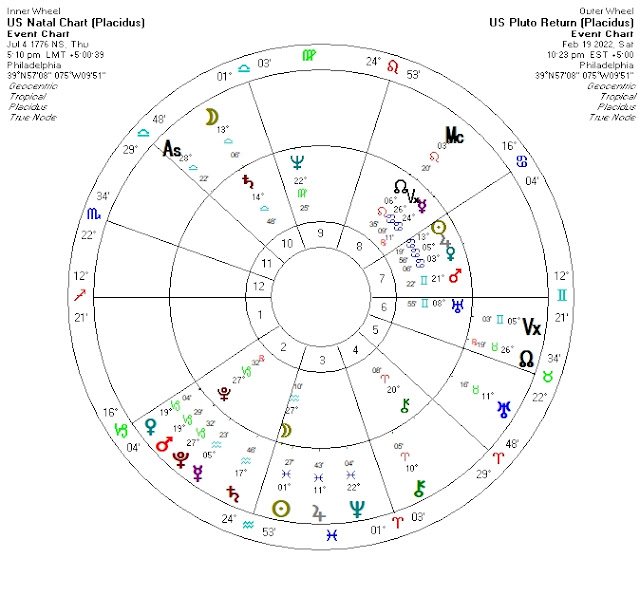 “The whole continent of North America appears to be destined by Divine Providence to be peopled by one nation, speaking one language and professing one general system of religious and political principles…” [1]

When Newsweek reporters interviewed ACLU Deputy Legal Director Jeffery Robinson in 2018 about the Black Lives Matter movement, he commented that social media messaging has brought heightened awareness around police violence toward African-Americans. As a result, Robinson said, the U.S. was having a “naked lunch moment.” Robinson explained that this was a reference to the novel written by Beat generation author William Burroughs based upon his profound experience with addiction. Robinson said that when Burroughs was asked about the meaning of the title Naked Lunch, he responded that “it’s the moment when everybody has to look at what is really on the end of their fork.”[2]

I consider the Naked Lunch novel and its meaning as an appropriate analogy to the period the United States is experiencing when the planet Pluto returns to the exact degree of its natal placement in the astrological chart symbolizing its birth.  A planetary return represents the completion of one cycle and the initiation of a new one in the life of an individual, or in this case, a country. Thus, it is a time when U.S. citizens might reflect on national accomplishments during the last 246 years related to matters represented by the planet. In a section that follows, I will describe more fully the symbolism associated with Pluto.

The Sibley Chart of our nation’s “birth” is frequently accepted by astrologers (but not to the exclusion of other charts), and that is the chart I have used to determine the exact pass of the Pluto return in February 2022. In the Sibley chart set for the signing of the Declaration of Independence at 5:10 pm on July 4, 1776 in Philadelphia, PA, Pluto is at 27°32′ Capricorn in the second house. By my calculations, Pluto reached that degree at 10:23 pm EST on February 19, 2022. This was the first pass to this exact degree in 2022. There will be exact conjunctions later this year in July and in December.

Generally speaking, the energies emanating from planetary aspects are felt also during the waxing or waning phase of the exact pass. In the case of the outer planets, the impact of an exact aspect can be in effect a considerable time before or after the event. Because Pluto is a slow-moving outer planet, I have allowed an orb of 10 degrees for this analysis of its impact.

THE DISCOVERY OF THE PLANET PLUTO

As early as 1905, Percival Lowell had hypothesized the existence of a 9th planet in our solar system. Unfortunately, he died in 1916 before he could identify this planet. However, an astronomer named Clyde Tombaugh carried on this project and in 1930 he successfully sited the astral body that would be named Pluto.[3]

Ten years later, in 1940, University of California at Berkeley scientists produced the substance that would be called plutonium. Chemist Glenn Seaborg named this man-made element after the planet Pluto.[4]

The most distant of the outer planets, Pluto has an approximate orbit around the Sun of 248 years.  No human experiences a “Pluto return,” but astrologers can analyze this return phenomenon in countries or other large institutions.

In keeping with the ancient tradition of naming the planets after the gods in Roman mythology, the small and most distant planet discovered in 1930 was named after one of the three sons of Chronus. Mythology tells us that Pluto was assigned to rule the underworld, which is quite fitting for this planet that receives no light from the Sun. His brother Poseidon was given the task of ruling the ocean realm. Finally, Zeus, the third brother, assumed rulership over heaven and earth, which seems like the choice assignment. Astrologer Ariel Guttman posits that responsibilities for ruling the realm of the dead might have led the god Pluto to have feelings of envy and anger toward Zeus.[5]

Pluto is known to have ascended into the earthly realm in search of a bride. Setting his sights on Persephone, he abducted her, taking her to be his Queen in his land of the dead. Because Persephone was the daughter of Demeter and Zeus, her parents initiated negotiations for her release. The final terms of this negotiation stipulated that Persephone could live part of the time in the upper world and the rest of the time with Pluto as his Queen in the underworld.[6]

In astrology, this myth of Pluto and Persephone represents the need for humans to find a balance between the world of the light and of the dark. Life is such that at times we need to descend into the unconscious to make conscious our personal demons. Through that descent, we can undertake the healing process.

Astrologers associate the meaning of a planet symbol with the quality of the time it was discovered. Astrologer Ariel Guttman reminds us that when the planet Pluto was discovered in 1930, it was a period of crisis in the United States, as well as in other parts of the world. The Stock Market had crashed the previous year, and the country was in a deep economic depression. Gangsterism was thriving throughout the country. Fascist dictators in Europe were imposing reigns of terror. Hence, at this time there was a climate of fear brought about by the challenges to financial survival and by threats of violence.[7]

Although there is a temptation to synthesize the meaning of Pluto in astrology to a single word, in actuality there are various dimensions to its meaning in a chart. Some of these words are neutral in meaning, such as power. Other words, such as transformation, might have functional connotations. Finally, words such as addiction might have a connotation of dysfunction. Below are Pluto descriptors often used in chart interpretation.

In evaluating the words associated with Pluto, they suggest that this planet represents the process by which we delve into the human shadow to extract the dysfunctional elements such that we can function in a healthier state.

Similar to its symbolism for individuals, the Ascendant reflects the personality of the nation. In the U.S. chart, the Ascendant is in the sign of Sagittarius. This zodiac sign is often associated with a personality that is optimistic, freedom-loving, explorative and expansive, and sometimes self-righteous. The ruler of Sagittarius is the planet Jupiter, which is in the country’s seventh house of “others” in a wide conjunction with the Sun and in closer proximity to Venus. These three planets are in the sign of Cancer, which is often thought of as security-conscious, patriotic, sensitive, and family-oriented. These planets reflect the core of what makes the personality (Ascendant) of the country “feel alive” (the Sun), what it values (Venus) and how it grows (Jupiter).

Also a resident of the seventh house, Mars is not a planet member of the conjunction described above. Like Uranus, Mars is in Gemini. The planet of action and war, Mars might be the energy of the United States that “others” often associate with the country’s identity. Mars reports to Mercury, the ruler of Gemini. Mercury in Cancer in the eighth house is closely tied to the corporations and investments and to the second house values. Are the second and eighth house interests why the U.S. goes to war?

The planet Pluto resides in the sign of Capricorn in the second house of the U.S. natal chart. This placement speaks strongly of an ambitious and goal-oriented (Capricorn) pursuit of the acquisition of resources and possession (2nd house). Additionally, Pluto is in an easy-flowing trine relationship with the planet Neptune in Virgo in the ninth house, which suggests that its concern for riches and their derivative power is tied to the creation of an American ideal (Neptune) of affluence. From an advantageous perspective, this ideal has led to a high standard of living and security (Capricorn) for many (but certainly not all) in this nation. On the other hand, one could say that much of the nation’s wealth (or lack thereof) has been based on deception or illusion (Neptune), one example being the trading of derivatives. Consequently, the economic reality is not as grand as what it appears to be. Furthermore, the second-house Pluto trine Neptune in the ninth house of religious institutions and philosophy might also represent how the Puritan ethics of the early settlers have influenced values associated with the economic system and the individual work ethic. Because Neptune is in Virgo, it reports to the eighth house Mercury, the ruler of that sign. This illustrates how the nation’s Protestant Christian values are expressed widely by the influential media and large corporate entities.

The U.S. natal Pluto in Capricorn “reports” to Saturn, the ruler of Capricorn. The nation’s natal Saturn is exalted in Libra in the tenth house, the most visible national energy. Saturn is concerned with security and the creation of solid structures and systems, such as government and businesses.  Needless to say, the U.S. is a country known for its elaborate and costly defense systems. Simultaneously, the nation has the Libran aspirations of justice and equal protection under the law. It purports to be a representative democracy. Yet, some would say that it falls short of its aspirations.

The Moon often symbolizes the common people of a nation. In the U.S. chart, the American populace is represented by the Moon in Aquarius in the third house, which is the sector pertaining to the mind and communication. The American people can be said to be very inventive, particularly in the fields of technology and mass communications (Aquarius). Furthermore, Aquarius is ruled by the planet Uranus, which is in Gemini and the sixth house in the U.S. chart.

In the county’s natal chart, Mercury, the ruler of Gemini and the third house, is in the sign of Cancer in the eighth house. Natal Mercury is in opposition to natal Pluto. Consequently, our nation’s resources in the second house is closely tied to “other people’s money” in the eighth house, which represents banking and other financial institutions, as well as corporations in general. Furthermore, the nation’s mass media is owned primarily by large corporate conglomerates which are aligned with powerful financial interests and work in tandem with the government, generally speaking.

How has the more dysfunctional Pluto energy operated in the U.S., as reflected by major events and trends? The following is a snapshot of only some of the significant activities from the 1600s to contemporary times.

To Be Continued in Part II

[10] Henry Louis Gates, Jr., “How Many Slaves Landed in the U.S.?,” The African Americans: Many Rivers to Cross, accessed February 16, 2022. https://www.pbs.org/wnet/african-americans-many-rivers-to-cross/history/how-many-slaves-landed-in-the-us/

Posted by ASTROLOGY DIALOGUES at 6:22 PM