THE THIRD PASS OF THE SATURN-URANUS SQUARE 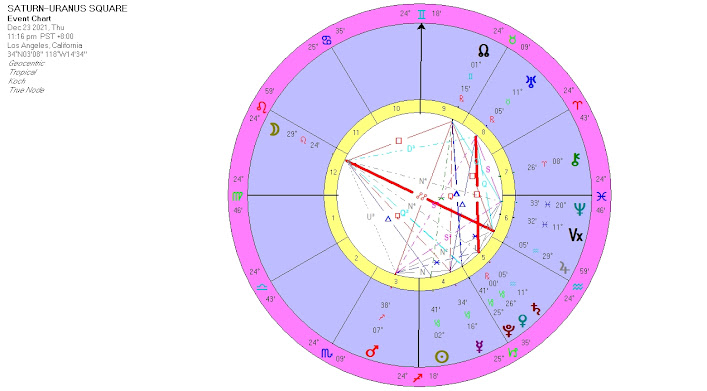 From this point forward, I will post articles at irregular intervals. These articles will feature diverse astrological themes that will not necessarily align with astrological events in a calendar month.

In 2021, the square aspect between Saturn and Uranus was a major theme in astrology. Earlier this year, these two planets formed exact aspects on February 17 and June 14. The third and final pass this year occurs late on December 23 at 11:16 pm in the Pacific time zone (or early on December 24 in other U.S. time zones). At that time, Saturn will be transiting 11° Aquarius 05ʹ while Uranus will be in retrograde motion at 11° Taurus 05ʹ.

Before I discuss the influence of this aspect in our societal realm, I want to review some of the astrological symbolism of the square aspect. Additionally, I present astrological descriptions of the planets Saturn and Uranus, as well as the zodiac signs of Aquarius and Taurus.

The language of astrology describes energy through geometric relationships between planets and the zodiacal signs in which these planets reside at any particular time. The square is the division of a circle by four. Therefore, the square describes the 90 degree relationship between two planets. Because planets in a square relationship will be residing in signs with incompatible elements, they are said to be in a hard aspect relationship to one another. More specifically, the square produces a situation of tension and strain. When in this formation, planets in a square relationship represent different needs and desires and therefore, will work at cross purposes. The square can precipitate feelings of uncertainty and generate doubts about the ability to cope. Yet squares can motivate us to resolve this conflict in some beneficial manner. In other words, squares can result in some positive change if we are committed to that.

The planet Saturn completes a revolution around the Sun in 29.4 earth years. Consequently, many of us earthlings will experience at least one full Saturn cycle around the Sun and often more than one. In astrology symbolism, Saturn represents “father time,” and the principle of contraction and containment. Saturn represents the wall between the planets that we “experience” more frequently in our concept of time, and those slow-moving outer planets that are more generational in nature. Saturn is reality in the way that we know it on earth. This planet builds concrete structures like buildings but also systems in business and laws in government. Generally speaking, Saturn represents authority and responsibility.

In its most challenging form, Saturn manifests as a lack of confidence, fear, denial and control. It can be said that this planet is about life’s trials and tribulations that positively result in the maturation of a human being if we are attuned to its lessons.

A slower-moving outer planet, Uranus completes a revolution around the Sun in about 84 earth years. It is the next planet after Saturn. Despite its proximity, Uranus symbolizes very different characteristics than Saturn. As such, it represents the urge to rebel and be liberated. Uranus stands for revolution and radical thoughts and actions. This planet also represents that which deviates from the norm. Under the influence of Uranus, we can expect the unexpected in situations where we are surprised, or even shocked.

In 2021, Saturn has transited the sign of Aquarius, a fixed air sign that thrives on the mental plane.  In the old system of astrology, Aquarius was ruled by Saturn. In the new mystic system, Uranus is the ruler of Aquarius. So, you can see that Aquarius will have an affinity to both planets involved in the aspect we are discussing. Although some describe Aquarius as being progressive, this sign also incorporates some of the conservative aspects of Saturn. Ultimately, Aquarius is concerned with the collective, in whichever group one chooses to become affiliated. Also, Aquarius is a promoter of mass communications, whatever the message.

During 2021, Uranus has moved from 6 degrees Taurus and as far as 14 degrees Taurus during its forward and backwards transits. Ruled by Venus, the zodiac sign of Taurus is concerned with serenity, simplicity, and in satiating the senses. Taurus understands the value of acquiring resources to fulfill its needs and its natives often collect things of beauty. This sign is capable of working hard and playing hard. As a fixed sign, Taurus might be slow to change its mind, and others say it demonstrates downright stubbornness.

The energies involved in this major aspect of 2021 reflect major differences. Saturn and Uranus vary considerably in their motivations. In fact, one can say that they have opposite goals. Also, the signs these planets have transited during 2021 also reflect very different characteristics.

Manifestations of the Saturn-Uranus Square in 2021

Astrologers often look back at previous eras where particular transits were active that often echo the societal themes of the present. Many have noted that the last time Uranus transited Taurus, fascism became a powerful political force in Europe. This transit was in effect from 1934/35 through 1941/42. At the beginning of that Uranus in Taurus transit, Saturn was in the late degrees of Aquarius. I am not drawing an exact parallel between the political thought of fascism in Germany, Italy, and Spain, but there have been similarities present in U.S. and in other parts of the world in recent times.

The Oxford University Press in its Oxford Reference online site defines fascism as: “An authoritarian and nationalistic right-wing system of government and social organization…Fascism tends to include a belief in the supremacy of one national or ethnic group, contempt for democracy, an insistence on obedience to a powerful leader, and a strong demogogic approach.”

From my perspective, the MAGA (“Make America Great Again”) supporters of Donald Trump are reflective of the Uranus in Taurus energy. They are slow to accept change (Taurus) and they are rebelling (Uranus) against a democratic process by the electorate (Saturn) that removed their demagogic leader.  Their actions, as reflected in the January 6 insurrection, stemmed from a motivation to promote chaos and to utilize violence in order to keep a fascist philosophy in place.

One can also view the friction between Uranus and Saturn in the behavior of the American public as it pertains to the Covid-19 pandemic. While most Americans see a benefit in applying containment measures (Saturn) to slow the spread of Covid-19, some believe their personal freedom (Uranus in Taurus) to be of greater importance. In this case, the Uranian rebels oppose the advice to get vaccinated. Furthermore, a segment of this population also refuses to wear masks.

The potential for radically overturning (Uranus) settled law, such as Roe v. Wade (Saturn) is evident in Supreme Court arguments occurring in early December 2021. The majority of justices have been proponents of eliminating abortion protections or severely curtailing access. Needless to say, it will be interesting to see which force wins in this test of a woman’s right to choose.

I would reverse my interpretation of astrological symbolism in the following example. During 2021, environmental activists magnified their message and have called for radical strategies (Uranus) to counteract climate change and protect our planet Earth (Taurus). Part of their strategy was to include these measures in the “Build Back Better (BBB)” budget reconciliation plan. Beyond environmental measures, this BBB plan continues efforts to eliminate child poverty, expansion of Medicare, and an enhanced paid family leave plan. However, it is being opposed by Republicans and conservative Democrats who argue that the national debt must be contained (Saturn). Their critics ask why they never use the same rationale in terms of military spending, which continues to expand.

We can apply the symbolism of astrology on a personal level as well. We can look to see where Saturn is transiting 11° Aquarius and 11° Taurus in our own natal charts. It is likely that this will be a time when we need to make some choices, whether we consciously decide to do so, or if some unexpected event propels us to take action. Keep in mind that early in December (late on the third Pacific Time or early on the fourth in other time zones) we experienced a New Moon Solar Eclipse at 12° Sagittarius12ʹ. As we know, eclipses signal meaningful changes in our lives. Therefore, as a result of these two major cosmic events, be observant of situations in your life calling out for alterations.

Posted by ASTROLOGY DIALOGUES at 5:07 PM