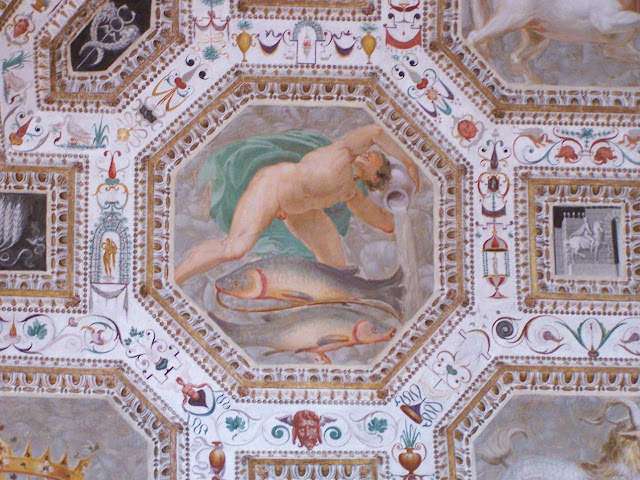 Fresco showing the Zodiac symbol for Aquarius at Palazzo Chiericati in Vicenza, Italy

The Big Picture in February

This month, the sign of Aquarius is very pronounced. On the first, we have these five planets plus one asteroid in Aquarius: the Sun, Mercury, Venus, Jupiter, Saturn, and Pallas Athena. We can expect an emphasis on ideas and talk that appear progressive and forward-thinking. People will be inclined to speak about the collective, particularly as it relates to actions that benefit particular groups. Issues that concern mass communications and technology might also be prominent.

The New Moon (23 Aquarius 17) occurs on February 11 and affects our emotional approach until the next lunation cycle. At this time, we see a bundle of six planets and one asteroid in Aquarius. In this sign, our emotions might appear to have a quality of detached compassion. A couple of weeks later, we experience the Full Moon (8 Virgo 57) that grounds us in earthly emotions. Now the Sun is in the water sign of Pisces, so there is a slight decline in the air element. At this Full Moon, we can hope to see the ideas at the New Moon put into a tangible form.

Mercury, the planet of the mind and communications, is in retrograde motion for most of the month. This small but potent planet will retrace the cosmic territory in Aquarius it previously transited before moving backwards on January 30. Mercury will begin direct motion on February 21 at 4:52 PM PST, but it will still be in its post-retrograde shadow until it reaches 26° Aquarius 29ʹ on the evening of March 12.

Generally speaking, Mercury retrograde periods highlight our need for reviewing and reassessing our projects and repositioning ourselves accordingly. From my own experience, not all Mercury retrogrades have had the same impact on my life. Some I barely feel, and others have seemed like they dealt a whopper blow. Perhaps because of so much current planetary activity in Aquarius and the Saturn-Uranus square, I am anticipating that the news (societal or personal) we hear this month will be especially quirky. Because Aquarius is associated with mass communications, this area of our lives might not be quite normal. During Mercury retrograde periods, we also might be prone to misinterpret what is communicated to us.

February is the first month of 2021 in which we will experience the exact square between the social planet Saturn and the outer planet Uranus. In the paragraphs that follow, I will expand upon the meaning of this aspect as well as the energetic qualities of Saturn in Aquarius and Uranus in Taurus.

The language of astrology describes energy through geometric relationships between planets and the zodiacal signs in which these planets reside at any particular time. The square is the division of a circle by four. Consequently, the square describes the 90 degree relationship between two planets. Because planets in a square relationship will be residing in signs with incompatible elements, they are said to be in a hard aspect relationship to one another. More specifically, the square produces a situation of tension and strain. When in this formation, planets in a square relationship represent different needs and desires and therefore, will work at cross purposes. The square can precipitate feelings of uncertainty and generate doubts about the ability to cope. Yet, squares can motivate us to resolve this conflict in some beneficial manner. In other words, squares can result in some positive change if we are committed to that.

The planet Saturn completes a revolution around the Sun in 29.4 earth years. Consequently, many of us earthlings will experience at least one full Saturn cycle around the Sun and often more than one. In astrological symbolism, Saturn represents “father time,” and the principle of contraction and containment. Saturn represents the wall between the planets that we “experience” more frequently in our concept of time, and those slow-moving outer planets that are more generational in nature. Saturn is reality in the way that we know it on earth. This planet provides the impetus to build concrete structures like buildings and also systems in business and government. Additionally, Saturn represents authority and responsibility. In its weakest form, Saturn manifests as lack of confidence, fear, denial and control. In general, this planet is about life’s trials and tribulations that can result in the maturation of a human being.

Aquarius is an air sign that thrives on the mental plane.  In the old system of astrology, Aquarius was ruled by Saturn. In the new mystic system, Uranus is the ruler of Aquarius. So, you can see that Aquarius will have an affinity to both planets involved in the aspect we are discussing. Although some describe Aquarius as being progressive, I think there are conservative aspects to Aquarius in the sense that this sign will support retaining practices and materials that still serve a purpose, while welcoming new innovations that will advance society. Ultimately, Aquarius is concerned with the collective, in whichever group one chooses to become affiliated.

A slower-moving outer planet, Uranus completes a revolution around the Sun in about 84 earth years. It is the next planet after Saturn. Despite its proximity, Uranus symbolizes very different characteristics than Saturn. As such, it represents the urge to rebel and be liberated. Uranus stands for revolution and radical thoughts and actions. This planet also represents that which deviates from the norm. Under the influence of Uranus, we can expect the unexpected in situations where we are surprised.

Ruled by Venus, the zodiac sign of Taurus is concerned with serenity, simplicity, and in satiating the senses. Taurus understands the value of acquiring resources to fulfill its needs. This sign is capable of working hard and playing hard. As a fixed sign, Taurus might be slow to change its mind, and others say it demonstrates downright stubbornness. Taurus is rather conservative in nature.

One can see that both Saturn and Uranus vary considerably in their motivations. Also, the signs these planets are presently transiting, Aquarius and Taurus, are also very different in their characteristics. Consequently, we can expect that their contact during 2021 will create considerable tension. Their union is a paradox!

The energies of the Saturn-Uranus might play out in various forms throughout this year at the social level.  I would venture to guess that there will be cautious legal and policy reforms (Saturn in Aquarius), some of them addressing events within the past year. As we saw on January 6 at the U.S. Capitol, the rebels (Uranus in Taurus) were not calling for progressive changes, but rather to retain a President who would be happy to bring back the ways of 1820, when neither women nor non-Caucasians had power. These social values, albeit not reflecting the majority of the U.S. population, are reminiscent of the last time Uranus transited Taurus (1934/35-1941/42). That was an era when fascism was spreading in Europe and the United States.

Another example of the energy of this square is the incident involving young online investors who challenged the bets made by Hedge Funds. Utilizing social media platforms (Aquarius) like Reddit, small-time investors promoted GameStop and other companies that have decreased in stock value. They engaged in stock transactions on the commission-free Robinhood trading platform. However, Robinhood claimed that it ran short of capital requirements based on SEC requirements, and, as a result, blocked (Saturn) further trading of GameStop stock. (Taurus is a sign concerned with resources and value, and is often associated with banking).  Hence, these financial market rebels (Uranus in Taurus) created frenzy on Wall Street.  As a result of public outcry, elected officials have called for an investigation of this matter in Congress. Will Congressional investigation result in new laws that create a new system of controls for social media/trading platforms and /or financial markets (Saturn in Aquarius)? In summary, this event closely reflected the energies of the applying Saturn-Uranus square and the pre-Mercury retrograde shadow. What’s next?

Posted by ASTROLOGY DIALOGUES at 12:10 PM