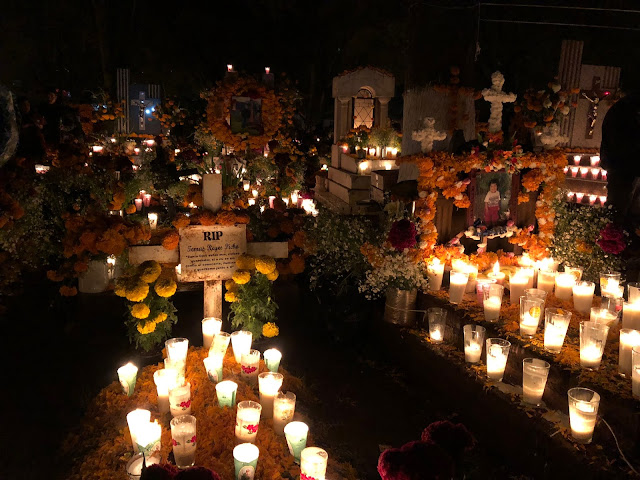 Photo by Melomano30 via Wikimedia Commons

The Big Picture in November

In the Northern Hemisphere, November is the month when we observe changes in the vegetation, whether in the form of plant decay or dormancy. Those of us who live in the warmer regions see less extreme changes in the natural world, and yet these subtle transformations are discernible.

For most of November, the Sun will be transiting Scorpio before it enters Sagittarius later in the month. Scorpio is the sign in the zodiac that symbolizes the cyclical death that is a necessary precursor to rebirth in the spring. This sign is associated with the profound and the taboo: death, procreation, mysteries, deep investigation, and revelations. Scorpio is ruled by the planet Pluto, the powerful force that transforms.

In many countries, November is often associated with the remembrance of the ancestors. I’m most familiar with the traditions of the Mexican culture’s Dia de Muertos (Day of the Dead) that coincides with All Saints Day. The photo above captures this tradition in Michoacan, Mexico, where residents visit the cemeteries to clean the gravesites and to build alters with commemorative objects that pay tribute to the deceased. These motifs in Mexico reflect a blend of both the native indigenous symbols as well as Christian icons. Interestingly, in ancient times, the indigenous Mexicans would dig up the actual remains of their ancestors to commemorate them. When the Spaniards colonized the New World, they forbade the excavation of actual skeletons. Consequently, the native populations created alternative representations of their ancestors.

What is the quality of the energy of November 2020? This month appears to have much creative energy in store. We will see the formation of six quintiles throughout the month, which signals potential  for harmony and a period when our talents are in high gear. Furthermore, the cardinal energy of Mercury and Venus in Libra during the first week favors the initiation of projects. (Mercury and Venus will enter Scorpio later in the month). Throughout the month, Mars is transiting go-getter Aries, adding to the climate of intense activity, particularly after this planet goes direct on November 13,. Of course, Jupiter, Saturn, and Pluto are still transiting achievement-oriented Capricorn throughout November.

Three planets changing direction might provide us with a sense of forward progress. Therefore, we might spend less time reviewing projects as we did during the retrograde periods. Instead, we might choose to focus on the implementation of our plans. Mercury, which rules communication and networking,  turns direct on November 3. A bit later,  Mars, the planet of will, shifts gears on November 13. Slow-moving Neptune, representing imagination and idealism, will transition into direct motion on November 28.

Now I will point out some of the challenges in November.  Venus, the planet of values, resources and relating forms several hard aspects. With her focus on relationships, Venus concerns herself with issues around harmony and balance, which also are associated with justice and fairness. In our personal or work lives, as well as in the societal sphere, we can anticipate potential tensions in this realm on November 1, November 3, November 9, November 11, November 15, November 19, November 25, and November 27.

Mercury, symbolizing communication and the mind, forms harder aspects in the earlier part of the month but softer aspects later on. There might be some attempt to suppress some information (in print or speech) on November 1 and November 3. Perhaps at work or home, there might be barriers to saying what we’d like to say. Additionally, something unexpected or shocking could be revealed on or around November 17.

During the second week of November, specifically on the 12th and 15th, hard Pluto aspects could reflect some big power plays operating in our personal or social environments, including in the public sphere. Will physical force be involved? Watch for this a few days before and a few days after the New Moon in Scorpio that occurs the evening of November 14 (PST).

On the last day of the month, November 30, we have a Full Moon Penumbral Lunar Eclipse (8 Gemini 38). Full Moons reflect a culmination of activity that began at the New Moon on November 14. Eclipses are powerful times of revelations that have the potential to enlighten us. The location of this eclipse falls in Gemini, which is ruled by Mercury. On this date, Mercury is still in Scorpio, which is ruled by Pluto. It could be that we might receive news that concerns a powerful event, an impactful decision, or details about a power play.

The major public event in the U.S. this month is the outcome of the general election on November 3.  For those of us who are very engaged with political issues, this will be an interesting event to observe. To what extent will Mercury retrograde phenomenon, such as misunderstandings, delays, and errors affect the election outcome? Will there be major technological issues? It’s interesting to note that Mercury turns direct right after noon on Election Day on the East Coast, and right after 9 AM on the West Coast.  In addition to Mercury retrograde, we might experience some forms of information suppression the first three days of the month, as I noted earlier. Finally, how will a polarized nation respond to the results of the election? How will the political parties and its citizens use their power? If anything, it will not be boring!

Posted by ASTROLOGY DIALOGUES at 11:17 AM