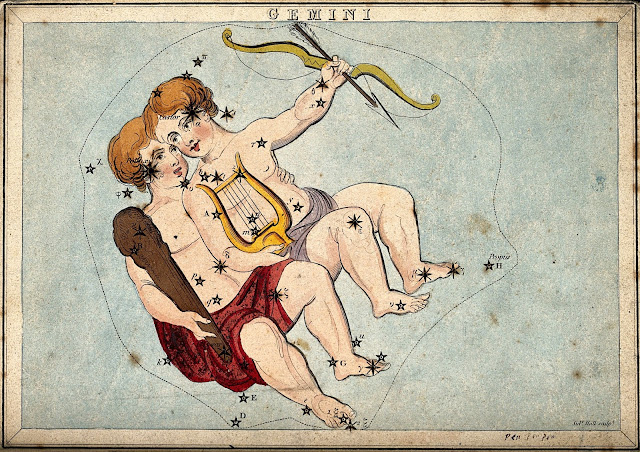 In June, we continue to be under the influence of the energies of Saturn and Pluto conjunct the South Node, all in serious Capricorn. The faster planet, Saturn, in retrograde motion, is moving away from Pluto, which is also moving very slowly in retrograde motion. However, Saturn will reverse its direction to forward motion in September and Pluto will do the same in October. Consequently, by January 12, 2020, Saturn and Pluto will be exactly conjunct at 22°46′ in Capricorn.

What does this all this Saturn and Pluto transit information mean? Although many astrologers refrain from predicting events, they instead focus on the energetic themes represented by planetary relationships. In the case of this duo, I will discuss the dynamics operating right now in June. Many western astrologers view the South Node as representing our past. The sign it transits provides clues to the habits and experience we’ve cultivated to date. Some astrologers believe if we are to grow, we need to incorporate the qualities represented by the North Node (now in Cancer). The water sign of Cancer is known for its desire to nurture and protect and for its deep compassion. Because Pluto and Saturn are presently conjunct the South Node in Capricorn, the symbolism suggests that there are Capricorn issues that we need to purge (Pluto) and restructure (Saturn). It could also represent the influence of the oligarchy (Pluto) on economic structures (Saturn).

At the inception of Pluto's entry into Capricorn in 2008, many astrologers were of the opinion that there would be a societal focus on how our economic systems have decayed and there would be a widespread call for transforming this realm. Because Pluto is currently conjoining the South Node, the notion of RELEASE is strong. Therefore, the symbolism operating during this month of June suggests the need to discard old patterns to make way for new approaches and structures.

The energy reflected in major planetary relationships (i.e. aspects) can often be observed before and after the exact aspect. As we approach the conjunction of Saturn and Pluto in January 2020, we have already witnessed outward manifestations of this energetic quality. For example, there has been much focus in the news about the terms of trade deals and the renegotiation of particular treaties. We are observing tariff wars and monetary inflation. Moreover, we hear about considerable discontent expressed by people throughout the world concerning the unhealthy state of both local economies and the global economy as a whole.

We have a New Moon on Monday, June 3. This occurs at 3:01 AM PDT when the Sun and Moon are conjunct at 12°34′ Gemini. This resetting of our emotional perspective suggests that over the next month we might be analytic about our feelings and accordingly, we could prefer to express our emotions through talking or writing.

An expert in the Sabian Symbols, Lynda Hill tells us that 12° Gemini is represented by the message “A Slave-Girl Demands Her Rights Of Her Mistress.” This concept urges us to challenge those who disrespect us and to stand up for ourselves. We need to pursue a path of self-determination. Broadly speaking, this perspective can apply to many people in various situations. From my perspective, I find this to be particularly relevant to women in these times as they demand better treatment in situations of sexual harassment. Moreover, a woman’s right to choose has become a major issue again as many states turn back the clock. These states want to further criminalize women and their doctors for particular reproductive health decisions.

In this month’s lunation cycle we have the Full Moon on Monday, June 17. This occurs at 1:31 AM PDT when the Moon is at 25°53′ Sagittarius. Lynda Hill taells us that this degree point is symbolized by the image of A FLAG-BEARER IN A BATTLE. This represents a time for standing up for your principles, whatever the cause. This is about having courage and the willingness to lead.

The planets that will change signs this month are Mercury and Venus. Fast-moving Mercury will enter mellow Cancer on June 5 and will shift into expressive Leo on June 28. Venus will leave Taurus, a sign it rules, and move into social butterfly Gemini on June 9.

When planets go retrograde, the expression of their planet’s function is turned inward. This month, Neptune goes retrograde on June 21 and won’t change direction until late November. We might note subtle shifts in matters dealing with spirituality, imagination, and artistic expression.

Saturday marks the beginning of June and we might have to decide between two very different perspective and activities. Do we keep it light and indulge our senses or do we accept the challenge of more adventure (Venus in Taurus quincunx Jupiter in Sagittarius). The next day, it appears that we find a way to be both indulgent and responsible(Venus in Taurus trine Pluto in Capricorn).

If we are conscious of the possibilities of being “out of bounds” with our words and our aggression, we have the opportunity at the end of the week to find an appropriate balance in expressing sensitivity to the needs of others with our commitment to being authentic to our values. It will involve some effort but the situation is ripe for this. (This is reflected in Mercury in Cancer sextile Uranus in Taurus).

With respect to a health issue, we might feel conflicted about how to handle a matter. On the one hand we have an “I’ll wait and see if this goes away” attitude. On the other hand we might want to find a quick fix. We eventually find a resolution that brings us a sense of harmony. (This energy is represented in Mercury in Cancer square Chiron in Aries and the Sun quintile Chiron).

On Sunday, we are in tune with our imagination and spirituality and we might just want to BE. Yet, all the Gemini energy might provide the impetus for wanting to be seen and to socialize with others. (This is one interpretation of the aspects of Venus in Gemini quintile Neptune and the Sun in Gemini square Neptune in Pisces).

On Monday, we could be better off discussing the thinking behind our work projects rather to expect tangible outcomes today. We might have differences with our colleagues about short-term strategies versus long-term plans. (This could be one interpretation of the Sun in Gemini quincunx Saturn in Capricorn and the Sun in Gemini opposing Jupiter in Sagittarius).

The action planet Mars is busy this week. Mars in Cancer is still out of bounds when it quintiles the disruptive planet Uranus on Tuesday. Simultaneously, Mars is opposing Saturn and Pluto, which are conjuncting the South Node. Some unresolved issue on the domestic front, at work, or in the world might explode at this time. It could signal that we are long overdue in addressing this issue. This does not mean that the worst possible scenario will occur, but it is likely that we can expect some stressful situations.

Also strong this week are the concepts of peacemaking, spirituality, and imagination because Neptune is significantly involved in aspects. A situation demands de-escalation through diplomatic and peaceful approaches (Jupiter in Sagittarius square Neptune in Pisces). Furthermore, we could see that imaginative approaches will pay off in producing concrete outcomes (Saturn in Capricorn sextile Neptune in Pisces).

The Venusian themes of relationships and resources are powerful this week. Through their quintile aspect, Venus and Chiron find harmony this week, signaling that at this time relationships can be healing or that investing resources in our health might be the best strategy. Now transiting the air sign Gemini, Venus is more interested in figuring things out through the mind and engaging in light-hearted networking. In Gemini, Venus doesn’t need to spend time in philosophizing like her date Jupiter, but she likes his fun attitude (Venus in Gemini opposing Jupiter in Sagittarius). She’s even less inclined to find much in common with someone too serious (Venus in Gemini quincunx Saturn in Capricorn). Under the guise of Gemini, Venus the bookworm feels a little friction with airy fairy types at the moment (Venus in Gemini square Neptune in Pisces). Venus is also steering clear of those heavy duty power mongers (Venus in Gemini quincunx Pluto in Capricorn).

This week we might benefit from viewing the world from the perspective of a maverick. Our personal or societal growth might hinge on seizing opportunities that are avant-garde and revolutionary (Uranus quintile the North Node and the Sun sextile Uranus).


MAY YOUR POWERFUL MIND AND COMMUNICATION SKILLS BRING YOU A REWARDING MONTH OF JUNE!


Posted by ASTROLOGY DIALOGUES at 3:56 PM