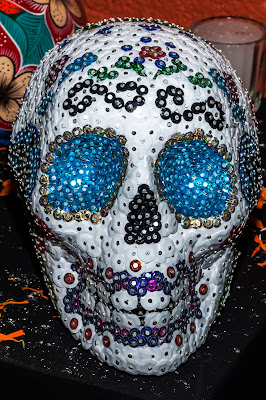 Photo by Dega86 via Wikimedia Commons

For most of November, we dive deeply into the emotionally intense realm of Scorpio. After the first three days of November, we lose some of the light of day as we shift back to standard time. We are squarely in the mysterious dark. In this time of Scorpio, we intuitively know this is the period in the cycle of life when some things are meant to be released. This could relate to old visions that previously fulfilled us but now have no meaning. Or, it might simply pertain to some of our possessions that have outgrown their usefulness and that we now send to a recycling center.

This November will not feel like a dead time at all. There are major changes afoot. To begin with, the “Nodes of Fate” will be transitioning on November 6 from the Leo (North Node)/Aquarius (South Node) axis to the Cancer (North Node)/Capricorn (South Node) axis. The Moon’s nodes are points on the ecliptic (the apparent path of the Sun) which the Moon crosses; every thirteen days it will alternate between the south and the north nodes. Many modern astrologers view the nodes as representing our soul’s growth. The South Node is our path of least resistance because it represents our habits and the personal characteristics that are well developed. On the other hand, the North Node symbolizes the direction of our growth potential; these are the qualities of the sign we need to cultivate and incorporate for greater spiritual wholeness. Every 18 months, the nodal axis of these transiting nodes shifts signs. With this month's transition, both the collective humanity and we as individuals will benefit by adopting greater nurturing qualities and tuning into our feelings. This is the realm of Cancer, and its ruler, the Moon. This luminary represents the mother, and we can expect issues pertaining to the maternal to be important over the next year and a half. This symbolism includes not only human mothers but Mother Earth as well.

Uranus is a major player at this time. This planet of disruption and revolt is exactly squaring the Nodes of Fate as the month begins. Moreover, on November 6, retrograde Uranus moves back into the sign of Aries, which it left this past May. Aries is an initiatory cardinal sign and is known for its warrior spirit and downright feistiness. This signals that there might be major issues that will call us to action.

Two other planets will also change signs. Jupiter leaves the weightiness of the underworld as it transitions from Scorpio to Sagittarius on November 8. As the ruler of Sagittarius, Jupiter is now on home territory. This planet of expansion will focus on issues important to Sagittarius through December 2019. These topics include the law, internationalism, philanthropy, long-range planning, as well as learning and teaching. Additionally, Mars, a personal planet, will enter the spiritual and artistic realm of receptive Pisces, where it will remain through December of 2018.

Venus, which has been retrograde since October 10, will move direct on November 16 in Libra and will remain in this sign for the rest of November. As a cardinal sign, Libra’s strength is initiating efforts in diplomacy, mediation, and in the arts, to name a few of the areas where it thrives.

Mercury is out of bounds from November 2 until November 20. This means that it’s declination (north or south) is beyond the limits of that of the Sun. When this occurs, the characteristics of the planet might appear out of control. Therefore, our communication function might appear to go beyond the normal limits!

Mercury retrograde periods occur on a frequent basis (three or four times per year). One is upon us this month. Mercury begins its retrograde cycle on November 16 and moves direct once again on December 6. However, Mercury retrograde issues remain prominent during the shadow period that began on October 8 and ends on Christmas Day. During this timeframe, communication might be operating at a different frequency, and consequently, we might need to ensure that our written materials and our spoken words are clear. Our communication might need revision to align with our intent.

Optimistic Jupiter remains in a conjunction with intellectual Mercury, so any communication we write or speak can inspire those who read or hear our words. If you are active in a political campaign, this is a great time to spread the message of your candidate or your cause.

Expect energetic harmony when Jupiter aligned with Mercury trines Chiron conjunct Hygeia (the Wounded Healer together with the Goddess of Health) and the North Node (the symbol of our spiritual growth). This is an optimum time to take care of personal health matters and/or help others or society heal in some fashion. These days are also excellent for the experienced to serve as mentors at work or in any other setting.

Focusing on that what soothes you is important during this potentially tense period as the Moon (Leo/Virgo) first opposes and then quincunxes the “must do planet” Mars in Aquarius. Also contributing to this  quixotic environment is the energy of the unsteady planet Uranus in Taurus opposing harmony loving Venus (retrograde in Libra). This time might be well spent on arts and crafts projects. The receptive energy facilitated by the Sun in Scorpio trine Neptune in Pisces could bring impressions that lead to artistic creations.

The first three days of the month bring to a close daylight savings time in the United States. The night and all its symbolism now is the predominate ambiance.

This week could signal many changes both in our personal lives and in the social climate. Remember we set our clocks back to reflect standard time!

With the Moon squaring Saturn on November 4, our emotions might feel weighty with concern or with obligations. We can lift our spirits with the aspirational thoughts (Jupiter and Mercury are still in alliance) or by engaging our artistry, particularly if we didn’t have time for this a few days before. As Venus and Ceres (Goddess of agriculture) conjoin, gardening might be an antidote for the blues.

With Uranus now back in Aries and squaring the nodes of fate, we might observe some surprises. Something from our past might resurface or some challenge could seem like it’s keeping us from making progress.

Nevertheless, the tone of our emotions will reset as the luminaries conjoin at the New Moon (15°11′ Scorpio) on Wednesday, November 7 at 8:02 AM PDT. Scorpio energy is no nonsense. This sign wants to get to the bottom of things in order to reveal the truth. What happened on Tuesday (Election Day) might cause some to request some investigations.

Whatever has occurred in the past, is subject to a new vision and long-term plan as Jupiter enters lofty Sagittarius on Thursday, November 8 at 4:38 AM PDT. The planet of expansion is ready to learn, teach, travel, and work toward a broad sense of justice.

The first couple of days of this week can feel restricting and intense, as first the Moon and Saturn conjoin, followed by a meeting of the Moon and Pluto. At the same time, the climate is ripe for dispassionate pleasures as Venus and Mars harmonize. We might feel some intellectual attractions when these two planets meet in the air signs of Libra and Aquarius.

Major changes occur on November 15th and 16th. Mars enters Pisces on November 15 at 2:21 PM PDT, a chill sign that runs counter to his active nature. While this planet is in this sign, we can accomplish more through our intuitive and receptive nature and with a perspective of unity. Mars will be in Pisces through December.

The following day, Venus turns direct at 2:51 AM PDT in the late degrees of Libra. Later that day, at 5:33 PM PDT Mercury goes retrograde at 13°30′ Sagittarius. Consequently, the time we took to review Venus issues (values, finances, aesthetics) might now be ripe for manifesting in the earthly realm. On the other hand, our concepts and ways of communicating might require review during this Mercury retrograde period.

This week, as Jupiter approaches the Sun, we can use this confident combination to our advantage. There’s a desire to make things happen, as Mars, the pioneering planet sextiles Uranus, the planet of lightening-like change.

Thanksgiving Day is filled with high energy. At 1:01 AM PDT, the Sun begins its transit of fiery Sagittarius. The Moon is void of course in Taurus most of the day, but it changes signs to quicksilver Gemini at 8:10 PM. When the luminaries oppose each other, we have a Full Moon at 9:39 PM PDT. Symbolically, full moons signify the culmination of energy, when we often can observe the fruits of our labor. On this holiday night, we have certainly enjoyed the harvest!

As the Sun and Jupiter form a conjunction with Mercury, this is an opportune time to promote yourself BIG time, whether through the written or spoken word. The fast-moving transit of the Moon opposing Saturn might temporarily highlight some emotional insecurity, but the need for self-preservation prevails when the Sun squares Mars.

Throughout this week you can make the most of discipline and patience when Mars squares Saturn. Temporary delays shouldn’t damper your efforts.

MAY YOU THRIVE DURING THIS INTENSE TIME OF CHANGE AND MAY YOU HAVE A BOUNTIFUL HOLIDAY!

Posted by ASTROLOGY DIALOGUES at 5:36 PM