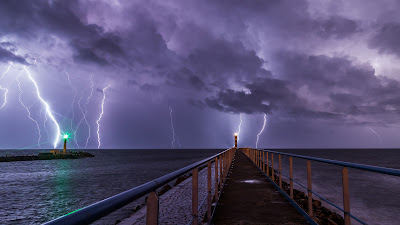 Port and lighthouse during an overnight lightning storm in Port-la-Nouvelle, France
Photo by Maxime Raynal via Wikimedia Commons

We are in a powerful eclipse season as we begin February. The day before, on January 31, we experienced the Full Moon Lunar Eclipse at 11° Leo. Typically, full moons are times when something is ripe for revelation or action and eclipses propel changes in our lives, as we release the old and bring in the new. Because this recent event happened with the Sun in Aquarius and the Full Moon in Leo, the themes in our lives concern the affiliations we have with those who share common interests in contrast to those we love in a more personal sphere. The Moon in Leo aligned with the North Node suggests that we incorporate more of what is our heart path.

We will observe the second eclipse event on February 15 at the New Moon Solar Eclipse at 27° Aquarius, which falls on the natal moon in the U.S. birth chart. It will also mirror the Total Solar eclipse of August 21, 2017 that occurred at the 28°53′ of Leo. Furthermore, Mercury, the communicator, conjuncts this eclipse and it sextiles Uranus, the awakener, thereby suggesting that some surprising or shocking information might come our way. Astrologer Rick Levine informs us that something very rare will happen at this eclipse, with the formation of septiles, which often symbolize fated events. Moreover, astrologers often use the Moon to signify the sentiments of the people of a country. Therefore, this eclipse could signify a critical juncture in our country’s path to its destiny.

Eclipse season seems to be a time when we lose people often associated with the themes of the eclipse, and in this case, it is the Aquarius-Leo axis. Aquarian fields are the sciences, technology or mass communications. But geniuses in any field can fit the Aquarian vibe. On the other hand, Leos are royalty, heads of state, stage performers or entertainers, or executives in any industry.

Every calendar month represents shifts in energy because the Sun will be in one sign for approximately three weeks before it transitions into the next sign. This month we will observe the contrasting energies of using the Aquarian mind (an air sign function) for innovative ideas and using the Piscean emotions (a water sign function) for imaginative solutions. Although we always observe this in February each year, this month it is particularly true due to the concentration of four planets (plus the significant asteroid Chiron) in Pisces toward the latter part of the month.

The First Week (February 1- February 3, 2018)
As we begin the month, Mercury has just entered Aquarius. We can expect communication to take on a detached tone with a visionary quality.  We might be motivated to relay our message to the masses. Also, Mars, the “Action Jackson” planet, has just moved into a new sign, Sagittarius, and it sextiles (i.e. opportunities with effort) Mercury, thereby reinforcing the desire to create a broad vision.

Venus, the planet of relationships, aesthetics, and resources, takes center stage this week. On Sunday, February 4, Jupiter and Venus form an exact square, suggesting that we might find ourselves in a situation where we have too much of a good thing. It’s Super Bowl Sunday, and this is when Americans indulge in their favorite finger foods and their preferred alcoholic beverages. Perhaps your spending may get out of hand.

Midweek, on February 6, the time might be ripe to hook up with quirky friend or you might have some brilliant money-making ideas when Venus sextiles Uranus. By the end of the week, when Venus shifts from Aquarius to Pisces, you might notice that you are not in a mood for the intellectual, but you would rather tune into your feelings and indulge in art.

We might develop some big plans for ourselves when the Sun forms a square with Jupiter on February 10. The thing to watch for here is that we might be frustrated with the enormity of this task.

We feel more at ease about our personal plans on February 13 when a sextile relationship forms between the Sun and Uranus. This energy prompts us to use some ingenuity to work toward our goals. At the end of the week on the 17th, we are poised to communicate our ideas when Mercury and the Sun are in exact alignment. As Mars in Sagittarius squares Neptune, we might feel uncertain or vague about our goals, but we should keep in mind that there is need to make room for our imagination before we ground those ideas into reality.

The BIG event of this week happens two days later on February 15 (at 1:05 PST) with the Solar Eclipse (Sun-Moon conjunction). In the “Big Picture” section above, I mentioned that this eclipse could bring news on the national scene, so pay close attention to your media outlets, particularly alternative sources. On a more personal level, we might experience people leaving our lives while new ones enter. We might feel an impetus to discard old viewpoints and adopt some new ones. Individuals with planets near 27 degrees in their natal charts might be particularly aware of changes in their lives.

We could benefit by putting finances in order or caring for our valuables on the day of the eclipse as Venus sextiles solid Saturn. It’s not a time for gambling (remember, you probably did that on February 3) but for developing some structure.

This week starts with the Sun entering Pisces, joining Mercury, Venus, Neptune, and the asteroid Chiron (known as the wounded healer). Sunday, Monday, and Tuesday might be best for artistic and spiritual endeavors. However, our thinking becomes more concrete as Mercury sextiles Saturn on February 21.

The Fifth Week (February 25-February 28, 2018)
As we enter the last week of this short month, the Sun will also sextile Saturn, aiding our ability to solidify our path. Our ideas and our values could see challenges when Mercury and Venus square confrontive Mars. What may result is that we realize the need to deepen these ideas and values as Mercury and Venus sextile Pluto.

I hope February brings everyone the energy for brilliant ideas and for imaginative creations!


Posted by ASTROLOGY DIALOGUES at 2:09 PM