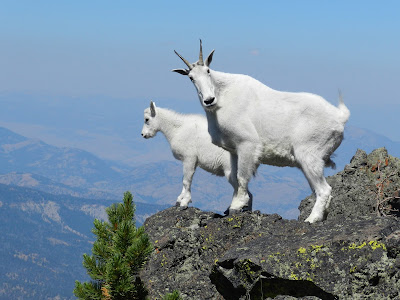 Nanny mountain goat with her kid on Sepulcher Mountain

Photo by Diane Renkin for Yellowstone National Park via Wikimedia

If there was ever a more ideal time to put into practice your resolutions, it is January 2018. The month begins with four planets in Capricorn: the Sun, Venus, Saturn, and Pluto. Earthy Capricorn is a cardinal sign, expressing the initiatory energy that brings in the new season of winter. In astrology, Capricorn is symbolized by the hard-working goat, which patiently climbs in ascent to the top to reach its goal. Carving out a significant role in society is important to Capricorns. Whether they choose a role in the business world or in the public sector, Capricorns are serious about overcoming any barriers that stand in their path of attainment. This does not mean that no obstacles are too great in their minds, because its ruling planet Saturn represents humanity confronting its insecurities.

In January of each year, the Sun always transits Capricorn for three solid weeks before it enters the fixed sign of Aquarius. As usual, the inner planets Mercury and Venus will also join in the transit of Capricorn during this month. What makes 2018 different is that it has been 29 years since the planet Saturn has been in Capricorn, a journey it begun this past December. This is home territory for Saturn, since it rules Capricorn. It now joins Pluto, the outer planet, in this serious terrain.

Because of their longer orbits, Jupiter and Saturn symbolize the themes that we witness in the political world and in our society in general. Jupiter is now in Scorpio, a sign involving matters often considered taboo. Jupiter is magnifying the issues represented by this sign, which has the charge of pursuing that which is hidden so that it can reveal the truth. This sign symbolizes power, including its misuse, as well as the topics of sex and taxes. We have just experienced a year when sexual harassment made big news in all sectors of society, and we can expect further revelations this year.

At the end of last year, the GOP’s tax plan was made into law, thus ushering in a massive shift of wealth from common Americans to the wealthiest in society. How will our populace react to this tax transfer during this coming year? Will they be involved in movements to restructure society or to replace their elected officials? Or, will they succumb to the authority, no matter the lack of sincerity in their message? Obviously, we live within a polarized society, but how people will align will be interesting to observe.

Whatever spheres we choose to be involved in during the first month of the year, it is likely that we will be engaged with a serious sense of purpose. Saturn in Capricorn brings a weightiness to our endeavors, and this month we will see that it has plenty of company from other planets, which are either passing by or staying a while in this heavy environment.


In some ways, the year begins with a bit of irony. On January 1, we have the Moon in the sign of Cancer. This sign is ruled by the Moon, which symbolizes a focus on memories and looking back on the past. Of course, when a new year begins, our thoughts are often on the future. However, Cancer can be nostalgic and it places value on tradition and the family. The Moon is opposing heavy Saturn in Capricorn on this day. This might reflect a time of obligations to family or feeling a commitment to family matters.

In contrast to the reflective energy of the Moon in Cancer, by late at night on the second day, the Moon goes into spirited and creative Leo, where it will remain through Thursday. You might feel increased energy as strong-willed Mars approaches buoyant Jupiter for an exact conjunction on January 6. The energy of these planets can fuel your passions. Consequently, this workweek can be productive and innovative, particularly now that we have the outer planet Uranus moving in direct motion in active Aries, thereby giving outward expression of its genius energy.


The Sun and Venus having been in waxing aspect to Pluto, and by Tuesday, January 9, they will be closely conjunct. We might feel particularly aware of what gives our life purpose and we might experience intensity around relationships or attractions to other people. Furthermore, this trio is in sextile relationship to expansive Jupiter and activist Mars. The sextile aspect is favorable when we take steps to use this supportive energy. All of this planetary active can be very powerful and significant in your life.

By January 11, we have a fifth planet, Mercury, moving into Capricorn. This is about authoritative communication. This is a time to be serious about how and what we communicate. This is direct and forceful communication. Fast-moving Mercury will align with four planets in Capricorn before it moves onto Aquarius on January 31.
The Third Week (January 14-20)


By the beginning of the third week, you might experience disruptions in how your life path unfolds and around relationships as Uranus, “the great awakener,” forms a square with Venus, and then the Sun. On January 16, when we experience a New Moon in Capricorn, we will have 6 planets in Capricorn! New Moons are always times when setting intentions for the following 30 days is apt, and when performed in Capricorn, your ritual can be particularly powerful.

During this third week, we begin to experience a lightening up of the heavy energy as Venus enters air sign Aquarius on January 18. Platonic relationships and group activities may be favored during this planet’s transit of this somewhat dispassionate sign. On January 20, the Sun begins its transit of the sign represented by the water bearer. With this new energy, we might expand our horizons to incorporate humanitarian aims, rather than being consumed simply by our personal goals. Aquarius favors unique approaches and technology that advances society.


The most significant event of this week is the shift of Mars from Scorpio to Sagittarius. Because Jupiter is in Scorpio, a sign ruled by Mars in traditional astrology, we now have a “mutual reception” with Jupiter ruling Sagittarius. From the perspective of astrologers, mutual receptions indicate a period when there is compatibility and a strong interchange of energy between planets.


The month is capped off with a Total Lunar Eclipse in Leo on January 31. This is a “Blue Moon,” because it is the second full moon of the month. Full Moons illuminate us around issues important to us personally or in society. This Full Moon is conjunct the asteroid Ceres, the earth goddess who rules matters regarding agriculture and ordinary people. Ceres also stands for protectiveness, whether that is in a maternal role or as a steward for the earth. Watch for items in the news that might pertain to these topics.

I wish you all a productive and creative month of January!
Posted by ASTROLOGY DIALOGUES at 4:48 PM