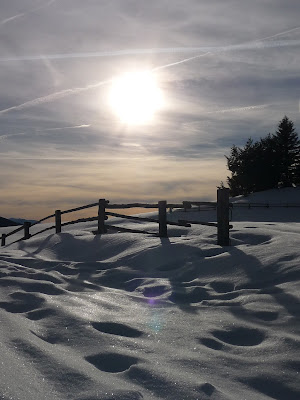 Photo by Leonii66 (Own work) [GFDL (http://www.gnu.org/copyleft/fdl.html) or CC BY 3.0 (http://creativecommons.org/licenses/by/3.0)], via Wikimedia Commons


The Big Picture
Before we talk about the month of December, I want to ask you what you thought about the preceding month of November. Were there enough reveals for you? I felt as if I had been caught in the middle of an avalanche of unpalatable information. There were so many revelations about alleged sexual harassment by prominent individuals in the entertainment industry and in politics. Sometimes the language of astrology manifests in subtle ways, but last month, powerful Scorpio brought much material to the surface in a straightforward way.

The inner planets of Mercury and Venus change signs often. However, the planets beyond Earth travel in more extended cycles. In December, the social planet Saturn leaves Sagittarius, which it first entered in December 2014. With a 29-year cycle around the Sun, this planet stays in one sign for about 2.5 years (or longer). With its entrance into Capricorn, it will now be in the cardinal sign it rules. Capricorn begins the new season of winter. During this season, the cold and the desolate often places limits on our activity and on what we can expect to reap, that is, unless we make accommodations and focus our labor on what is achievable. This sign often defers its reward until the hard work is completed.

In the symbolic language of astrology, Saturn represents authority, and when personified, it signifies the father or sometimes the wise crone. Before the invention of the telescope, Saturn was the last planet visible to the naked eye. Thus, it represented the boundary between reality and the outer realms of the unknown. Consequently, Saturn signifies structure, boundaries, and contraction.        The serious planet Saturn favors that which is solid and long-lasting. It is a weighty planet indeed!

The last time Saturn was in Capricorn was in the late eighties and early nineties. That era brought great changes to the Soviet Union in its transition from a communist economy to a capitalistic economy. The country shrunk as some of its territories chose to form their own nation states, and leaving at its core the government of Russia. Correspondingly, this nation also pulled back from its interventions beyond its borders. Of course, the relationship between the U.S. and Russia is currently big news, and it will be interesting to see what develops in this international dynamic over the course of the next three years with Saturn in Capricorn.

As a U.S. citizen, my concern is how Saturn in Capricorn will affect our economy as well as the governance of the United States. In the wee hours of December 2, we saw the GOP dominated Senate pass major tax reform legislation that provides increased benefits to the wealthiest Americans while putting greater tax burdens on common Americans. Capricorn symbolizes old age. Will this new era of Saturn in Capricorn bring new constrictions in caring for our elderly population, of which I’m a part? What will be the reaction of the American public be to the changes brought about by this legislation? Will the U.S. experience a transformation similar to what the Soviet Union underwent nearly 30 years ago?

The other major news this month is Mercury retrograde and its alignment with Saturn. Mercury represents the mind and our communication function. When it conjuncts Saturn, there are various interpretations to the meaning of this relationship. This might be a time when there is a need to communicate with those in authority. Because of the serious nature of Saturn, this might reflect a need for us to be more businesslike in the way we analyze or present our communications. Alternatively, this could be a period when authorities attempt to block communications. What came to mind for me is that the FCC will be deliberating on the issue of Internet neutrality on December 14. Because the Administration is dominated by Republicans, they select the majority of commission members. Since these members represent the interests of major corporations, they may vote to end net neutrality, thus allowing Internet providers to decide who can have access to what information and at what price. This would certainly create barriers to equal access to information.

In ancient Rome, Saturn ruled both hard work and the ability to play hard, as represented by the wild celebrations of the Saturnalia. Perhaps us commoners will need to keep in mind that we need to celebrate our victories while we pursue the task of changing society to meet our needs.

First Week (December 1-2, 2017)
Mercury stations and then begins its retrograde motion the evening of December 2 on the Pacific Coast. This is an opportune period to build a solid structure to your existing projects or your plans for new projects.

There is an exact aspect between Jupiter in Scorpio and Neptune in Pisces when they form a trine on December 2. This aspect will repeat in late May and again on August 19. The water signs are very psychic and spiritual, so this time is prime for integrating reality with the more sacred dimensions. Listen to your instincts.

Mercury conjuncts Saturn for the second time on December 6 (the first time was November 27). Mercury is the planet of thought and serves as the messenger for what deserves our attention at this time. Its function is to help us connect the dots between facts and to understand the meaning of these facts. When it comes up against Saturn, it is like hitting a wall, which causes us to question whether things are real. This is a time to look for proof of the truth.

There is a Full Moon in Gemini on December 3. This is a restless time, when there is plenty of movement. Full moons illuminate the dominant themes in your life, which in this case involve the Geminian issues of  your local environment, siblings, and all things related to communication. Mercury retrograde is going to be more powerful because it rules Gemini. Pay attention to messages now. Keep in mind that there might be a need at a later time to rethink and redo what we accomplish now.

We will have three planets in a T square with Netune, Sun, and the Moon at the Full Moon. This is about communication and all the planets in Sagittarius are about our ideals and our philosophy. This dynamic causes us to reflect on our identity as we reassess our values.

We witness another planetary shift when Mars moves into Scorpio on December 9. Mars energizes what it touches. It is at home in Scorpio, the sign it rules in traditional astrology. This bodes well for any projects that involve research or taking action on information that has come to our attention.

Mercury trines Uranus on December 10, with the the third and final time on January 6. This is a time when we are ripe for receiving knowledge that leads to our awakening.

Venus squares Neptune on December 10, a dynamic that might prompt us to tap into aesthetics or to incorporate deeper spiritual values in our life.

Mercury retrogrades over Venus on December 15. This might bring us information about a love interest or about a possible investment, but it probably isn’t the time to expect action on these matters.

Sun trines Uranus on December 16, a time when we might experience some breakthroughs on matters related to our life path or our identity.

The New Moon in Sagittarius occurs on December 17/18, when our emotional nature is uplifted into focusing on possibilities for the future. This is the time to set intentions for the coming month.

On December 19, Saturn begins its transit of Capricorn, right before the Sun also ingresses. At this time, Mercury is about to reverse its course to begin direct motion on December 23. Mercury will conjunct Saturn once again in January (on the 10th).

Venus trines Uranus on December 20, possibly setting the stage for a surprise around a love interest or your personal finances.

Sun enters Capricorn on December 21, ushering a period when we feel ready to make commitments to projects, other people, or to routines in our life.

Finally, communication may begin to feel like it is returning to the normal realm when Mercury turns direct on December 22/23.

When Mars in Scorpio forms a trine with Neptune, we are called back to the realm of imagination on December 27, just in time for the approaching celebration of the New Year.

MAY YOU ALL HAVE A LOVELY HOLIDAY SEASON!

Posted by ASTROLOGY DIALOGUES at 8:37 PM