THE COSMOS CLIMATE OF APRIL 2017 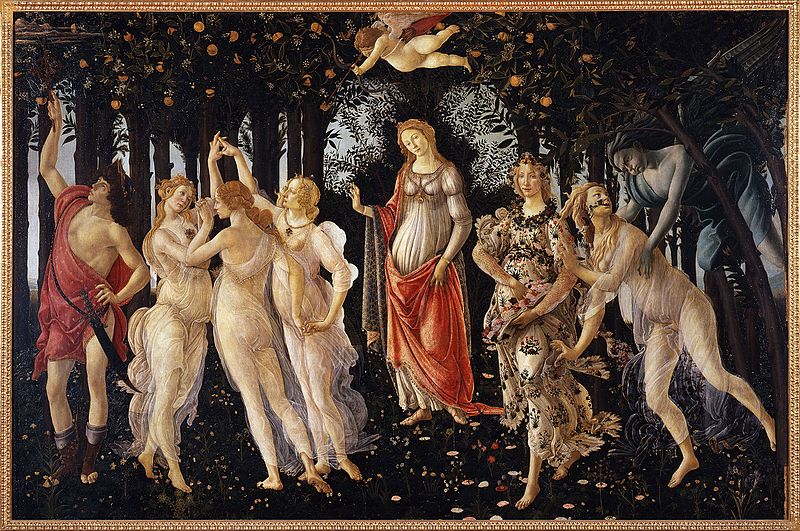 Photo by Google Art Project and downloaded from Wikimedia Commons

We enter April 2017 still in the New Moon phase, which began five days before in the sign of Aries. At each New Moon, we refocus the expression of our feeling nature in the realm of life where the New Moon falls in our particular chart. As the first sign of the zodiac, Aries learns about the world by forging ahead with new experiences. Hence, our emotional nature is eager to start afresh. The imprint of the New Moon lasts through the lunar month. However, as might be expected, we have other celestial influences this month that might curb our urge to start new relationships or ventures.

As happens often in astrology, other planets will often counter and mollify the energy of a planet. This is the case this month because the inner planets, Venus and Mercury, as well as the social planets Jupiter and Saturn will be in retrograde motion. A retrograde planet is closer to the earth during this specified period of its orbit. When this happens, from our perspective on earth, the planet appears to be moving backward. During retrograde cycles, the energy is often expressed inwardly in a state of reflection concerning the urge represented by the planet.

This Venus retrograde period began March 4 and has a duration of 40 days. In its synodic cycle,Venus lines up with the Earth five times every eight years. Each time it does this, it is 72° away from its previous cycle, and cumulatively over the eight years, these points will form a pentagram, a five-pointed star. During a Venus retrograde period, we reflect upon such themes as relationships with others, our values, and the earthly and ethereal beauty that we need in our lives. This reassessment may lead us to reconnect with people from our past. Venus will still be in retrograde motion through April 14, but it will not leave its shadow (i.e. the territory it covered before its retrograde) until May 19.

Saturn, the planet of contraction, will begin its retrograde motion on April 6 and it will not reverse course until August 25. Saturn concerns itself with building solid and long-lasting structures. The Saturnian realm involves  issues of responsibility and commitment. To those who view the meaning of Saturn on a more spiritual or evolutionary level, this planet addresses karmic matters. Furthermore, Saturn often represents government, and I am curious as to how the GOP and its Chief Executive will handle issues around the national budget. The funding of our federal government is set to expire in late April, and this raises the question as to whether the Republican dominated Congress will begin enacting severe cuts at this time or whether they will decide to postpone such measures. With the movement of the Sun into the conservative sign of Taurus on April 19 and the New Moon in Taurus on April 26, we may hear much discussion by the elite about the need to curb the federal budget (with the exception of the military). However, Mercury and Uranus are conjunct at the time of the New Moon in late April, and this suggests that the voice of the progressive (revolutionary) community may be strong. As previously mentioned, we might hear surprising or even shocking stories during this period. Consequently, on a personal level, we might want to be aware of our own communication patterns to avoid being the subject of some major scoop!

On April 11, we have a Full Moon at 21° Libra (which is conjunct Jupiter at 24° Libra) and opposing the Sun at 21° Aries, conjunct Uranus at 24° Aries. This is a powerful time when we see the desire for harmony and relationship (the Libra nature) at odds with the need for spontaneity and independence (the Aries nature), the latter echoing the theme of the New Moon. Additionally, we have enormous tension expressed by the square between Pluto, the planet of purging, and the Jupiter-Uranus opposition. This T-square formation demands action in order to release this tension. At the time of this Full Moon, Jupiter (the planet of expansion) is in retrograde motion and Pluto is approaching its retrograde, so this suggests that the spotlight might be on old issues that we are revisiting on a personal or societal level. It appears to me that the peacemakers of the world (Jupiter in Libra) have an enormous task in tempering those forces of ego-driven rebellion (Sun conjunct Uranus) and various powerful forces (Pluto). We have recently witnessed an escalation of warfare in the Middle East, including in Iraq. There may be unexpected or surprising events occurring through much of April, both at the international level as well as on the national scene in the U.S.

Soon after Venus begins its direct motion, Mercury turns retrograde on April 19. Consequently, we might be thrust into situations where we need to reestablish social ties with old networks or we may be called upon to reconnect with siblings or community associates. Mercury retrogrades are periods when we may be called to suspend our “normal” way of processing information. If we have a choice, we may want to postpone new projects, and we may be more productive revising or redoing old projects.

May the Peacemakers prevail in these unstable times!


Posted by ASTROLOGY DIALOGUES at 3:04 PM