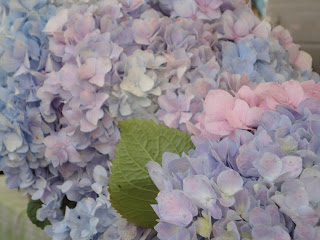 At 9:33 pm PST on February 18, 2016, the Sun began its transit of Pisces, a sign corresponding to the receptive water element and the adaptive mode of mutability. Persons endowed with Piscean energy are inclined to see the bigger picture, where they understand how separate parts relate to the whole. This energy is attuned to the realms of imagination and the dream state. Pisces is the sign most associated with spirituality and the transcendence of reality.

The image at the top of this article is my photo of hydrangeas, the flower family (native to Asia) that I’ve selected to represent Pisces. The flower heads are comprised of many tiny flowers that seem fluid in their boundaries and meld into a whole structure, much like Pisces energy. The root of this flower is often used in healing as a diuretic. Its leaves are also used in teas. Thus, hydrangeas seem to have a special affinity for the liquid form and the water element.

The following are accomplished Pisceans:


George Harrison: He earned fame as a member of the British band The Beatles, and he later pursued an independent career as a songwriter and singer. His musical style was heavily influenced by his Hindu faith—think of his song “My Sweet Lord.”

Ralph Nader: As a long-time consumer advocate and activist, his work has centered on issues pertaining to the public interest and the commons.

Rudolf Steiner: the supremely gifted “Renaissance Man” who synthesized mysticism with science to create a school of thought called Anthroposophy.

Nina Simone: the genius pianist, composer, and singer whose unique artistic style expressed rage against the lack of racial integration in her native country.


May you all utilize Pisces qualities during this time to feel whole and integrated.


Posted by ASTROLOGY DIALOGUES at 3:20 PM